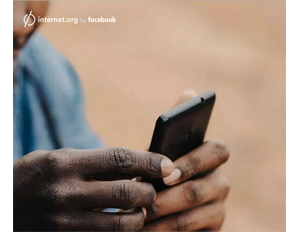 There has been a lot of coverage recently over India’s ousting of Facebook’s Free Basics Internet access program. Free Basics, is part of Facebook’s Internet.org effort to provide people in underdeveloped and economically depressed areas access to basic services across the Internet including access to healthcare, education, and information pertaining to their local area.

Free Basics, in all essence, is Internet parceled out to poor (and particularly, of color) communities. It’s Mark Zuckerberg, while well-intentioned, perhaps, deciding which aspects of the Internet the less fortunate may access.

India’s government said, “Thanks, but no thanks.â€ As per The Daily Beast, “the Telecom Regulatory Authority of India (TRAI) announced that it has prohibited a practice known as zero-rating, or the offering of select applications or Internet services at no cost.â€

Why? Well, there are a few issues. Those who are staunch supporters of net neutrality–the idea that Internet access should be free of content or bandwidth limitations and restrictions–say that Free Basics gives a private company, in this instance, Facebook, too much control over what many, many people would be able to access over the Internet.

From The Daily Post, an online Indian news site:

Internet.org is designed to usher a “walled garden” approach to the Web, and therein lies [sic] its potential for doing exactly opposite to what the Free Basics campaign trumpets as its grand motive–digital equality.

Again, without question, the idea of Free Basics came from a positive place as evident by Zuckerberg’s opinion piece in The Times of India:

So the data is clear. Free Basics is a bridge to the full Internet and digital equality. Data from more than five years of other programs that offer free access to Facebook, WhatsApp, and other services shows the same.

If we accept that everyone deserves access to the Internet, then we must surely support free basic Internet services. That’s why more than 30 countries have recognized Free Basics as a program consistent with net neutrality and good for consumers.

Who could possibly be against this?

Yet, the sentiment is strewn with some naivetÃ© that people from economically-challenged areas are just willing to take the crumbs the rich throw–especially when those crumbs are from loaves of potentially free marketing and advertising to make the rich even richer, another problem with this sort of selective Internet altruism.

From a piece in The Guardian by Tim Berners Lee: “In the particular case of somebody who’s offering … something which is branded internet, it’s not internet, then you just say no. No it isn’t free, no it isn’t in the public domain, there are other ways of reducing the price of internet connectivity and giving something … [only] giving people data connectivity to part of the network deliberately, I think is a step backwards.â€

Adding to the level of uneasiness regarding white males deciding what masses of brown and black people may or may not view on the Internet is a Tweet from venture capitalist Marc Andresseen: 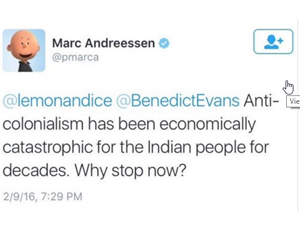 The backlash to Andreessen’s tone-deaf and insulting Tweet was such that he walked it back: 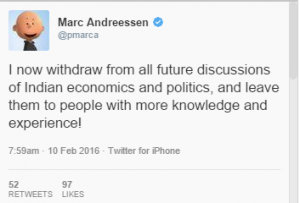 Facebook, under Zuckerberg’s leadership has raised a lot of awareness on issues of poverty, inequality, and seems, overall, committed to making the world a better place. Yet, this recent dialogue about Free Basics and Andreessen’s unfortunate tweet, shows how persistent racism, even subtle racism is, and why the need for diversity in tech and true net neutrality is imperative for people of color.