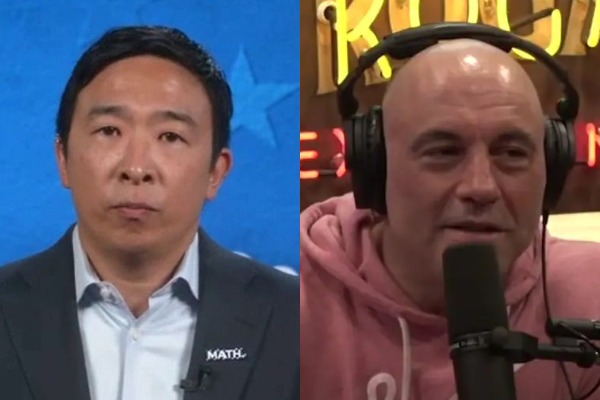 Rogan has been under fire for spreading COVID conspiracies and hurling racial slurs on his Spotify-hosted podcast, “The Joe Rogan Experience.” Amid fierce debates around Rogan’s alarming comments, Yang decided to speak up and defend him before quickly changing his mind.

“I don’t think Joe Rogan is a racist — the man interacts with and works with black people literally all of the time,” Yang captioned a since-deleted tweet, as captured by Business Insider.

“Do I know Black friends of Joe’s who would swear by him? Yes I do,” added the 2020 presidential candidate.

As soon as he hit send, Yang was called out, with DNC Chairman Jaime Harrison asking, “Dude… seriously?! You joking right Andrew? Is that now the new defining line… working with folks?!”

“I like to believe the best of people – especially if I’ve met and spent time with that person. Sometimes it makes me miss something,” Yang said.

“I think we should have the capacity to forgive people – whether a podcaster or a mayor – if they mess up. Maybe it’s because I mess up too.”

Rogan faces backlash for resurfaced video clips showing his repeated use of the N-word, among other racially insensitive remarks. The upset over Rogan’s racist comments came to light after musicians started pulling their music from Spotify due to Rogan promoting COVID-19 misinformation.

Amid all of the demands for action against Rogan, Spotify decided to remove over 100 episodes where he said racial slurs and COVID conspiracies. On Sunday, Spotify CEO Daniel Ek told staff in a memo that he did not “believe that silencing Joe is the answer.”