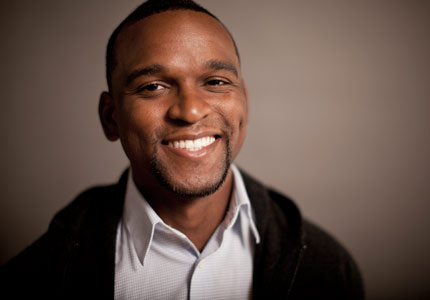 One of the best parts about attending the Consumer Electronics Show (CES) or any conference for that matter, is meeting new people: up and coming web developers, podcasters and analysts, among others.

This year, I ran into Antonio Wells, founder of AndroidTapp.com. Aside from being based in Chicago (my favorite town), AndroidTapp has won me over because it provides reviews, news, and troubleshooting for the more than 400,000 apps in the Android Marketplace.

In 2008, while at AXA, he learned of Google’s Android mobile operating system and how it was poised to compete with Apple’s mobile app ecosystem. With that in mind he created AndroidTapp.com, a website dedicated to mobile application reviews. AndroidTapp gives consumers a concise “try it before you buy itâ€ experience by listing pros versus cons, screenshots, star ratings, user reviews, and video demonstrations of paid and unpaid Android apps.

“I always had an affinity towards Google’s services and had an epiphany in foresight of the potential thousands of applications that would be created by third party developers,â€ says Wells. “I decided to focus on writing about quality applications and give consumers an unbiased overview of why an app was worth downloading or not. This resource in my opinion is much better than wading through several frivolous comments often found attached to apps in Google’s Android Market when app shopping.”

AndroidTapp recently created its own Android application store where third party developers can have another distribution channel to monetize their apps beyond the Android marketplace. The app store only sells apps rated four stars out of five stars or higher. The apps are vetted for quality similar to Apple’s model, says Wells. He also plans to launch a mobile app video show in the near future.

AndroidTapp is a part of NetShetler Technology Media, an advertising network of some of the world’s most influential technology websites including Crackberry.com, VentureBeat.com and MacRumors.com. NetShelter’s network of sites collectively reaches more than 150 million unique visitors per month, according to ComScore, and form the number one largest “tech media company online” outranking CNET and AOL properties.

BlackEnterprise.com caught up with Wells at the 2012 International Consumer Electronics Show in January. Check out the chief editor’s insight on newly released hardware and, of course,Â  Android apps.