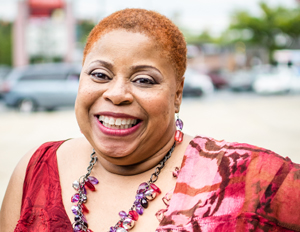 Karen Quinones Miller keeps it real, tells it like it is and takes that straight to the bank. The best-selling author of Satin Doll (Simon & Schuster; $14) and An Angry-A** Black Woman (Gallery Books/Karen Hunter Publishing; $15), Miller lets her characters and story lines flow from her own real-life experiences, tapping into a reality-based fiction that draws her audience in again and again. The NAACP Literary Award nominee taps into inspiration from her struggles as a middle-school dropout, who’d go on to become a journalist at the Philadelphia Enquirer, an instructor at Temple University and self-publisher of her first book, ultimately launching her into the mainstream literary success.

BlackEnterprise.com caught up with Miller on the heels of her latest release — and after a four-year hiatus — to discuss her creative marketing tactics, her commitment to authentic stories that engage with a loyal audience, and her strong advocacy of people part of Mitt Romney’s “so-called 47%.”

Your latest book, Angry A** Black Woman, is semi-autobiographical. Talk about tapping into your own experiences to create story lines and characters that your audience relates to.

After I became a writer at the Philadelphia Enquirer, I felt very insecure, not about my writing skills, but about my background. Â … I always felt if they really knew the person they had hired, they’d get rid of me. I was a person who ran the streets of New York. A lot of the people who were making the news were people I knew. I felt like I was living two lives.

I think that’s one of the reasons why I can keep a loyal audience. Fiction needs to be truer than nonfiction. All of my stories are based on my own experiences. Every single book. Every story I’ve written is a different aspect of me. People ask me, “Do you regret growing up poor in Harlem?” and I say, no, not at all. It made me the woman I am, and I never have a problem with storylines. (Laughs) …Â I call Angry A** Black Woman an autobiographical novel.

You had a very interesting and inspiring journey to being a self-publisher, with quite a creative hustle to gaining success.

I really wanted to write the manuscript [for Satin Doll] because Camille [my daughter] asked me to, and it was therapeutic. I decided I wanted to get it published. I knew I needed an agent, so I sent 35 queries out and got so many rejection letters. I decided not to let publishers decide whether I’d be a success, so I’d self-pub. I made a lot of mistakes, like bringing 86 boxes of books into my one-bedroom apartment at the time. To make room for all those books, we had to move the couch out (and someone stole the couch.) I hadn’t taken into account that 3,000 books was a lot of books. I assumed everyone liked to read as much as I did, and I thought they would sell in no time. I took an unpaid leave from my job to sell the books. My rent was due, so I had to sell those books. (Laughs)

We printed out postcards—in my home—that included a picture and synopsis of the book, and my daughter and I would take shifts in printing and distributing them. We’d go into the chain bookstores and put them inside books that were in my genre. We’d put coins in the newspaper stands and take out all the newspapers, put a flier in each one, and put them all back into the stand. We’d post them everywhere.Â We went so hard, we sold out of the books within two months and had to put in more orders. The demand grew, and by the time the second printing came out, it was sold out within two days. That caught the attention of distributors, leading to an auction. There were so many agents there to get the book, even one who’d turned me down twice before.