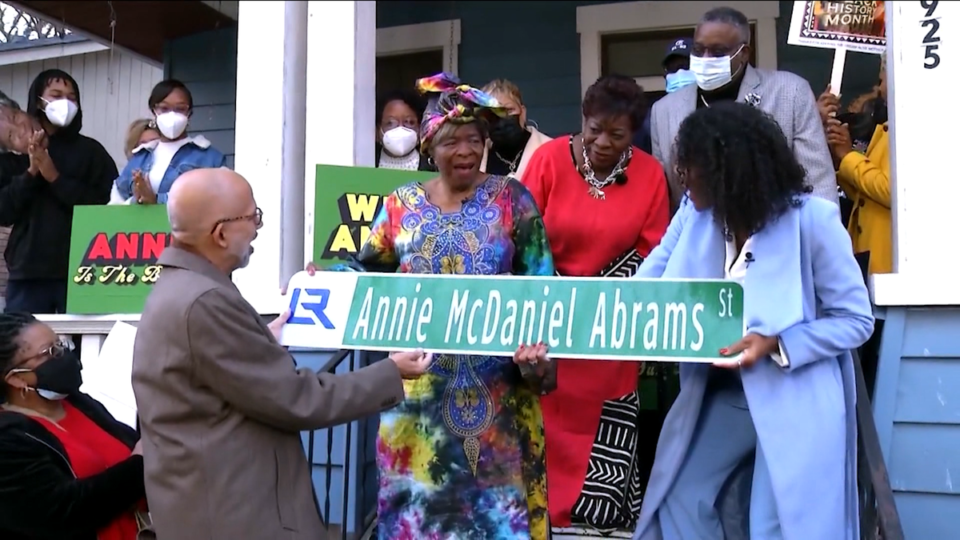 The front porch of her Little Rock home was filled with community members and loved ones as she was presented with a street sign named after her and a donation from Wells Fargo to the Annie Abrams Living Legacy Award scholarship at Ouachita Baptist University.

.@janai is in Little Rock, Arkansas to surprise civil rights pioneer Annie Abrams with a street sign named after her!

Abrams was among the mentors giving the “Little Rock Nine” the courage to make history. https://t.co/20ZszK3Khp pic.twitter.com/pHQoqBlDDL

“Oh my god, I feel like a little girl having a birthday party,” Abrams said excitedly.

In 2010, Abrams was inducted into the Arkansas Black Hall of Fame. This achievement recognizes her leading efforts in paving the way for generations of Black students in Little Rock. The Arkadelphia native is being celebrated for her contributions to supporting the “Little Rock Nine,” the Black students who fought to desegregate Little Rock Central High School in 1957.

As an integral part of the Arkansas Teachers Association (ATA), Abrams paved the way for generations of Black students in Little Rock. She campaigned to rename streets in Little Rock after Black leaders who made a difference in the city, including fellow activist Daisy Bates, Little Rock’s first Black Mayor Charles Bussey, and Martin Luther King Jr.

“Honey, listen, you can’t beat giving to God’s children! That’s all I ever done. Just giving!” Abrams said while receiving her donation prize. “I wasn’t a millionaire, but I gave away love.”