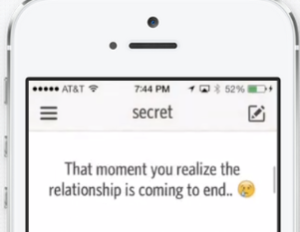 Raising $8 million without a business model isn't new in Silicon Valley, but the Secret team is banking on anonymity.

The funding comes from “a mixture of venture capital firms and angels,” according to Secret’s blog post. These names include Alexis Ohanian of Reddit fame, and MG Siegler of Google Ventures.

The incredibly popular anonymous sharing app is only 45 days old, and hasn’t shared any hard figures in terms of user count.

It has, however, provided a few tidbits about its users and their level of engagement. “Notably, 75% of people with more than 5 friends come back every day,” the company said in a blog post. “Furthermore, 90% of users that engage in a conversation come back within the week, often several times per day. Data like this reaffirms our belief that there is opportunity to build a platform around rich and unexpected conversations.” Unfortunately, many of the conversations aren’t exactly positive ones.

Secret is part of a new and growing market of semi-anonymous social apps that allow sharing of information that would be deemed to scandalous, sensitive, or offensive, to be shared without repercussions.

They have seen an astounding amount of pushback from various people and institutions, however. The similar social sharing app Yik Yak recently banned teens from using the app to prevent bullying.

While these apps allow users to share personal info and get it off their chest, it’s also a source of stress and cyberbullying for teens and coworkers, making any of these apps’ popularity a double-edged sword.