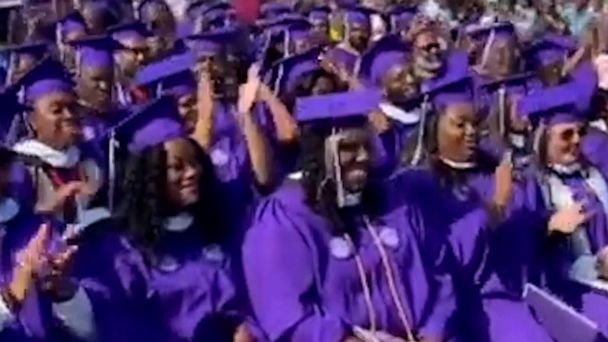 Graduates of Wiley College in East Texas received groundbreaking news during their ceremony after learning an anonymous donor helped wipe away their student debt.

Over 100 students at the historically Black college were in attendance for the graduation ceremony on Saturday when the school’s president made the big announcement, CBS News reports.

“You are debt-free. You do not owe the college a penny. If you have a balance, you had a balance,” the school’s president and CEO Herman J. Felton Jr. told the graduates.

In a news release, the school noted that the graduating class of 2022 had balances owed to the school of about $300,000. But now, thanks to an anonymous donor, the graduates can enter into the working world with no worries about paying for their college education.

“We are constantly communicating with donors to assist students in these ways so that they can begin their after-college experience with less debt,” Wiley said.

“We are grateful for this anonymous donor who will assist the students in paying off their balances to Wiley College and help us achieve institutional goals of graduating our students with little to no debt,” he added.

Wiley carries a strong history. Named after Bishop Isaac T. Wiley, the school was founded in 1873 as a primarily liberal arts institution affiliated with the United Methodist Church.

Wiley College also served as the inspiration behind the 2007 Denzel Washington film The Great Debaters. The film retold the story of a 1935 debate where Wiley students won a debate against the University of Southern California’s nationally-known team when segregation ruled the country.

In recent years, tuition at Wiley was lowered to $17,500 a year, NY Post reports. The current tuition covers fees, room, and board, allowing Wiley students access to a more affordable education than offered at other colleges. While the 2022 class had their debt paid off, some students still have a balance at graduation.