Anthony Anderson Says, "Don't Compromise Who You Are In Order To Succeed" 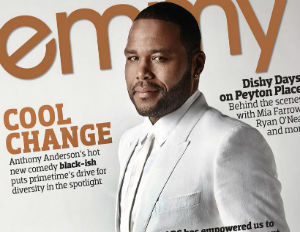 Funny man Anthony Anderson, star and executive producer for ABC’s hit-seriesÂ Black-ish, has kept us entertained during his long and successful acting career, starring in multi-genre blockbusters such asÂ Big Momma’s House (2000),Â Barbershop (2002),Â The Departed (2006), andÂ Transformers (2007). However, theseÂ films account for only a handful of Anderson’s roles and appearances. The multi-talented performer has received an Emmy award nomination for Lead Actor in a Comedy, he won an NAACP Image Award earlierÂ this year, and will host To Tell the Truth, a game-show reboot to air on ABC.

Anthony Anderson’s ever-impressive roster of movie credits includeÂ Life (1999), with Eddy Murphy and Martin Lawrence, as well as the star-studdedÂ Me, Myself, & Irene (2000),Â Romeo Must Die (2000), and the infamously wonderful black comedy, Kingdom Come (2001). In addition to keeping us laughing, he also gives back, and has supported a number ofÂ nonprofit organizations, such as the American Heart Association, FACE Diabetes, and Artists for a New South Africa (ANSA); who’s supporters include actors Alfre Woodard, Denzel Washington, and Blair Underwood, as well as former President Bill Clinton and Desmond Tutu, among others.

[Related: ‘Shaft’ is NOT a Comedy]

BlackEnterprise.com caught up with Anderson to discuss Black-ish, African American culture, and how young creatives can find success in the entertainment industry.

BlackEnterprise.com: In Black-ish, Dre is constantly trying to ensure his children stay true to their cultural heritage. Being a father and having experienced financial success, what strategies have you used to instill an appreciation for black culture in your own children?

Anderson: My strategy is very basic. I’m the one who ‘made’ it. My family still lives in ‘the hood.’ I take my children to the hood where my mother still lives. I grew up in Compton. I was born in Watts. My Grandmother lives in Watts. I grew up in the projects in Watts— The Nickerson Gardens. I take my children to birthday parties of family members who are still in the hood so they can see where I come from and how some of our family still lives. We do community service work with Habitat for Humanity. My son, he’s fifteen, goes into Compton and helps build homes for the residents, for homeless people in the inner city. My daughter just finished her freshman year at the University of San Diego. She’s getting her degree in social work and wants to get a Ph.D. in it. Â My children see how we live, know how we live, and understand who their father is and where I come from.

The pilot episode of Black-ish was lifted directly from my life. My son, who was twelve years old at the time, came home and said he didn’t feel black. I said, ‘son what do you mean you don’t feel black?’ He went on to talk to me about his feelings, or lack thereof, of blackness. He was born into a life of privilege. All my son has ever known is private schools. He’s never had a want or a need for anything. He sees how his cousins still live in the hood and that that’s not his reality. I had to explain to him that his twelve-year-old ‘blackness’ is different than that of the people that he sees on television, news, and the media. It’s different than my childhood growing up in Compton. There are different degrees of our blackness, of who we are.

What advice do you have for young creatives of color–actors, writers, and directors–who desire to be successful in the entertainment industry without compromising their cultural identity?

Stay the course. Continue to tell your story. For those who don’t identify with your story — not that it’s a black story — that’s ignorance on their part. Continue to be honest with yourself and in the stories that you tell. No one is asking anyone else to compromise who they are and where they come from in order to succeed. Why should we? Why should you, as a person of color? Continue to be who you are. There is a system that we work within, but be honest to who you are.

In an industry powered by ratings, what keeps you inspired? What moves you as an artist?

Honesty. You know when things are fabricated or forced. Yes, I work in a world of fantasy, but when someone is telling a story and bringing these characters to life realistically and truthfully, that’s what resonates. Real recognizes real. As long as people are connecting with these characters and the stories they are telling, that brings it all together.

To see Anthony Anderson work his magic, watchÂ Black-ish at www.abc.go.com. The series will premiere this Fall, Sept 23, on ABC.