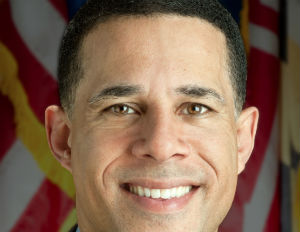 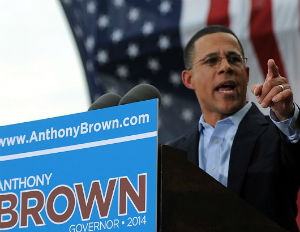 Anthony Brown seeks to become America’s next transformative political force. A month after announcing his bid to become Maryland’s first African American governor in 2014 — only two blacks have ever been elected to that post — he visited the headquarters of BLACK ENTERPRISE to share his vision.

At 51, the Harvard Law School-trained JAG attorney and Iraq War veteran, has spent the past 14 years in Maryland state politics. He has served as Lt. Governor over the past six years, taking point on advancing, among other areas, education, health care and economic development for Gov. Martin O’Malley’s administration. In fact, he was pivotal in the state exceeding its goal of awarding 25% of nearly $8 billion in contracts to minority firms, a target that was recently raised to 29%.

As he engages in campaign fundraising and other political contenders emerge, he is designing a platform that builds on his achievements and expands “ladders of opportunity” while addressing challenges such as crumbling infrastructure and an alarmingly high rate of gun violence. The following excerpts are from an exclusive interview that BLACK ENTERPRISE Editor-in-Chief Derek T. Dingle conducted with Brown last week:

BlackEnterprise.com: How would your approach differ from that of your predecessor. If elected, will you just continue policies created under the O’Malley administration or develop new initiatives that will distinguish your administration?

For starters, it is important to point out that Maryland over the last six years has experienced considerable successes in a number of areas. We’ve built the best schools in the nation. We’ve made college more affordable. We’ve met and exceeded our goals for MBE. We expanded health coverage to 365,000 Marylanders who didn’t have it. And we’ve driven crime down to historic lows. It’s important for me to build on those successes.Â  Until every child has access to a world-class education, whether you’re educated in Baltimore City schools or in Bethesda-Chevy Chase, our job is not done. I’m looking to address the educational achievement gap so that every Maryland child and his or her parent can wake up and say, “Yes, I go to a No. 1 school.”

Maryland is recognized as a leader in implementing [President Obama’s] Affordable Care Act but that’s really not enough. We have outstanding institutions like Johns Hopkins University of Maryland Medical Center but when we continue to experience health disparities both by geography and race and ethnicity, our work is not complete. So my focus will be addressing these persistent gaps in our economy and our society that prevent many Marylanders from experiencing a real equality in opportunity.

So what gaps will you seek to close as it relates to educational opportunities?

Anecdotally, I see around Maryland some successes but there is tremendous opportunity in the area of career technology education. There are many students in our schools for whom the four-year college degree is not something that they are thinking about. Quite frankly, it’s not something they necessarily need to succeed in life because we know that 35% of the jobs that we create in the next five to 10 years won’t require a four-year degree. It will require something more than a high school diploma and that’s where CTE comes into play by providing our students with basic educational requirements but coupling that with a real skill that can be everything from HVAC to building trades to the allied health profession. That doesn’t start post-high school but can begin in middle school [and] high school partnering with community colleges. These are skills that lead to family- supporting jobs. These are ladders into the middle class. They are often overlooked.

We’re moving into this information age [and we can use CTE to] provide young people with a tremendous opportunity to compete.

Now that the state has increased the MBE contracting goal to 29%, what initiatives will be put in place to meet the new target. Where will minority firms realize the greatest areas of opportunity?

We’re doing a number of things. First of all, our focus is across multiple industries but we have real opportunity in growth industries like life sciences, health care, information technology and cyber-security…industries in which we have underutilization of MBE contractors. If we are going to meet our goals, it is incumbent upon us not to sit back and sort of suggest to the MBE community to go ahead, develop yourselves and when you’re ready compete for contracts and procurement opportunities. No, instead we have a program called MBE University where we actively engage the MBE community. We provide technical assistance in terms of getting certification in Maryland. More importantly, we connect our MBE community to prime contractors to developÂ  relationships. The third piece is that it helps connect our MBE community to decision makers in state government they need to know as they go through the procurement process.

So what else will you do to ensure minority firms build capacity to handle large contracts and become prime contractors?

There have been complaints over the years that the MBE program, not just in Maryland but around the country, doesn’t really provide the incentive for a firm to go from that subcontractor to general contractor. Some of that has to do with net worth limits. What we did was recently change our law where you can come in as a certified MBE general contractor. Where in the past you could not get credit because you only get MBE credit for subs, we now give up to a certain percentage for services and products that you are providing as the general contractor.

Have you placed a greater emphasis on debundling contracts as a means toÂ  develop more MBE primes?

You have to do that. For example, IT contracts are usually large contracts. Frankly, I think that is one of the primary reasons why we have been able to meet and now exceed our MBE goals. In 2007, Gov. O’Malley and I told all of our contracting agencies: “You got to meet the goals, and we’re not offering a whole lot of waivers if any so you have to look at your bundled contracts and find opportunities for MBE contractors.”

The American Society of Civil Engineers gave the state of Maryland a grade of C- in its 2011 state-by-state status report on infrastructure. What are you doing to upgrade roads, bridges and other transportation needs while boosting participation ofÂ  MBEs?

We look to public-private partnerships to invest in [and] help modernize our infrastructure. We look at the new resources available by passage of the Transportation Infrastructure Investment Act which will basically increase the gas tax to give us an additional $4.4 billion over the next five years. So we now have the tools and resources. The way we ensure MBE participation is we take that program like MBE University and proactively engage the MBE community now…not when we go out to bid, not when we see the bids come back and woefully wonder why we didn’t meet our goals.

On the front end, we are going to work with the MBE community in developing capacity where it might not already exist in critical areas. For example, if we see there is a dearth of MBE businesses in design engineering then let’s see what we can do to encourage and promote [this development] — and if necessary, look outside the state of Maryland — to help meet our numbers. We want to look at all services and functions required to deliver infrastructure and where we see a lack of MBE participation then we proactively reach out and recruit.

Maryland’s black unemployment rate still hovers above 10%, roughly double the rate of whites and Latinos, respectively. What are programs you will put in reverse this trend?

Through our state procurement and capital programs, one of the things I think is ripe and can give us some real opportunity is to encourage community hiring. When Maryland taxpayers are investing in a $60 million high school in Baltimore city then we ought to have Marylanders in those construction jobs. One way to do that is to enter into community hiring agreements with contractors. Whether the business is Maryland based or not, we would like for them to hire Marylanders. Legally you cannot mandate that [action] but we can offer preference points for contractors willing to hire locally. That’s one way the state can positively influence employment in the African American community.

The FBI recently reported that Baltimore was No. 6 in per capita murders – 35 per 100,000 citizens – in 2012. What do you propose to significantly reduce gun violence throughout the state?

We have passed what many consider one of the most stringent gun safety laws in the nation [during] this last legislative session. It goes a long way to eliminating straw purchases. We hear a lot about tragedies like Newtown, Connecticut that involve high-velocity, high-magazine weapons. Those weapons are intended for the battlefield and that’s where they ought to be. But there’s also the day-to-day gun violence that you’re not reading about where the assault is with hand guns. Our gun safety legislation requires licensing and the licensing requires fingerprinting. There are studies that have shown that you require someone seeking hand gun permits to undergo fingerprinting then you filter out a whole lot of bad guys.

We also have provisions for increasing school safety and mental health. Gun safety legislation is only part of the package. You got to have good law enforcement and use of technology. You have to have inter-jurisdictional cooperation at every level of government — federal, state and local. Baltimore still ranks high, and Maryland is one of the top ten most violent states. We’re making a lot of progress driving down violent crime. I look at the success in Prince George’s County where we have reduced crime by 35% last year. Crime doesn’t just fall, you have to drive it down. We won’t stop until every Marylander can stand on a street corner in their community and say: “I live in one of the safest neighborhoods in the country.”