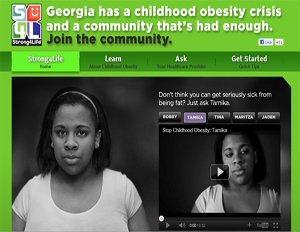 Children’s Healthcare of Atlanta’s Strong4Life campaign–a $50 million advertising project to be rolled out over 5 years–is receiving strong criticism from some in the public health community. The pediatric health organization launched its black-and-white “Stop Sugarcoatingâ€ campaign in response to the childhood obesity issue plaguing Georgia.

While some are in favor of the television commercials and billboards, several public health experts warn the approach could be counterproductive.Â  Some critics point out the advertisements do not give families the tools to combat the problem. Others agree that the images are only contributing to the negative portrayal of obesity, lowering the likelihood for parents and children to acknowledge the weight issue and seek out assistance.

Georgia has the second highest rate of childhood obesity in the nation; approximately 1 million children are overweight or obese, according to data compiled by the campaign.

Watch one of their television spots below: