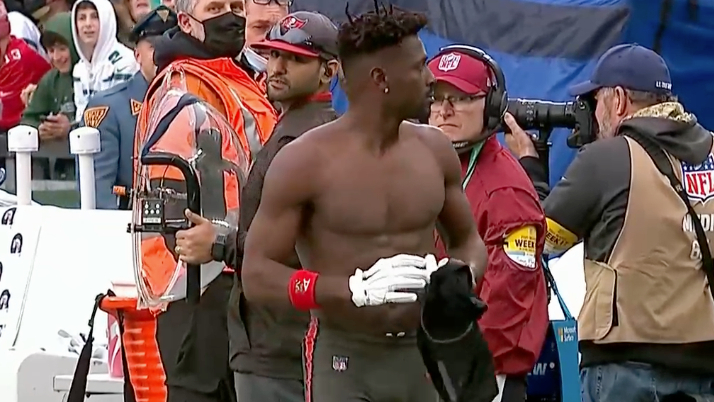 After being suspended late last year by the NFL for violating COVID-19 protocol by obtaining and then using a fake vaccination card, Brown made a dramatic exit from Sunday’s Tampa Bay Buccaneers game against the New York Jets. The way he left the game has inevitably ended his professional football career.

According to Yahoo! Sports, the troubled Brown left the game while it was still being played and without his shirt or shoulder pads before his team pulled out a victory over the New York Jets at MetLife Stadium in New Jersey.

The wide receiver was seen removing his football gear, then throwing his shirt and gloves into the stands and politely jogging off the field toward the stadium’s tunnel. Right before doing so, he was seen doing some jumping jacks in the end zone and waving to the stadium crowd before making his final exit.

At the time of the incident late in the third quarter, the Jets were leading, 24-10.

Antonio Brown has a meltdown at the hand of the #Jets and #BraxtonBerrios pic.twitter.com/RGhSYpyrOu

After the game, Buccaneers head coach Bruce Arians pronounced that Brown “is no longer a Buc.”

Arians on AB “He is no longer a Buc” pic.twitter.com/SXkvWvs2Ly

Just talked to Bruce Arians who said he was trying to get AB to go into game & AB refused. Tried again Brown refused & Arians told him to get out. On if he saw AB take his jersey off.

“Yeah, I did. Never seen anything like it in all my years.” @NFLonFOX

Social media wasted no time in chronicling the football player and the moment he left the game.

Antonio Brown waiting for the Uber 😂

Antonio Brown headed back to the locker room pic.twitter.com/Ld1UErv5Zt

Sources: Antonio Brown incident began because Tom Brady spiked AB’s Microsoft Surface and broke it. AB had downloaded Flappy Bird on the device and it was his favorite game. pic.twitter.com/73R6GI0XkU

BREAKING: Antonio Brown has arrived at his new home pic.twitter.com/VeDXQc3piI

Antonio Brown spotted heading down the NJ Turnpike back to Tampa… pic.twitter.com/F8ACTNH8xD