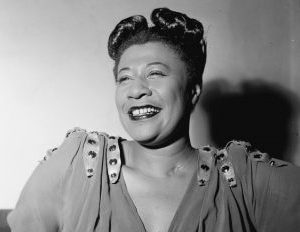 After leaving a lasting imprint in American music, there’s no place more appropriate to commemorate the life and legacy of Ella Fitzgerald than the place where she launched her illustrious music career, The Apollo Theater.

Fitzgerald, like Billie Holiday, James Brown, and many other singing greats in the 20th century, was first introduced to the world at the Apollo, which first opened its stage to black talent in 1934. That same year, Fitzgerald won one of the earliest Amateur Nights at The Apollo contests at the age of 17, making her the first woman to have ever earned that distinction. From there she went on to perform across the country with the Chick Webb Orchestra before she went solo in 1942.

During her life-long career, she made her mark as one of the greatest scat singers in jazz history and became known as the “Queen of Jazz.â€ She also earned 14 Grammy Awards and is noted for collaborating with Louis Armstrong and Duke Ellington. In 2006, Fitzgerald was inducted into the Apollo Walk of Fame.

Patrons of The Apollo’s upcoming celebration of Lady Ella will also be treated to performances by the Count Basie Orchestra and Howard University’s Afro Blue. Tickets, which are priced from $45 to $125, can be purchased online here.

Next year, The Apollo will keep her legacy alive with a discussion titled “Live Wire: Ella! A Centennial Celebration” on March 23, followed by a concert featuring contemporary jazz artists called “Apollo Music CafÃ©: Ella Fitzgerald Tribute” on April 17. A special Jazz edition of Amateur Night will also be held in her honor on April 19.