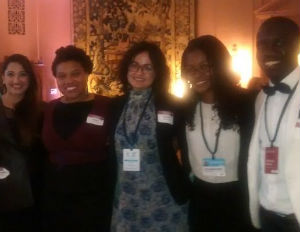 A funny thing happened to me while I was attending the final Annual Meeting of the Clinton Global Initiative.

During lunch, I had checked my e-mail and noticed the words, This is EPIC! sent from the president of my alma mater, Earlham College.

I never open e-mail that proclaims itself epic, furthermore in all caps and finished off with an exclamation point. But it was from David Dawson, Earlham’s president, so I took a chance.

And it was epic: Four students from Earlham College had been awarded the $1 million Hult Prize–”the world’s largest student competition for social goodâ€–by none other than President Bill Clinton at the Clinton Global Initiative Annual Meeting the night before.

According to Earlham College, “the Hult Prize, which is sponsored by the Hult International Business School and the Clinton Global Initiative, aims to create and launch the most compelling social business ideas.â€ I immediately signed up to attend the Earlham alumni event scheduled for that night.

After lunch, I returned to the CGI Annual Meeting and attended a session on Achieving Universal Quality Education, which I’ll be writing about next week. But after that session, I ran into one of the students on Earlham’s winning team–Iman Cooper, whose megawatt smile is hard to overlook. I also met Wyclife Omondi, another member of the four-person team, who is originally from Kenya. I didn’t get to meet the other two team members, Leslie Ossete, originally from the Democratic Republic of Congo, and Sonia Kabra, who hails from India, so I resolved to attend the Earlham alumni event–which had now become a Hult Prize celebration–that night.

The students–now all graduates except for Omondi, who expects to graduate next year–pitched their concept to the gathered Earlham alums. The team has developed an offline app–no expensive cell phone needed–that people in urban centers in developing parts of the world can use to make their public transportation a lot more manageable.

Can you imagine needing to take a bus–and not knowing when it will arrive, what you’ll be charged, or when the bus will leave? This is the reality for many in developing urban centers, making it difficult for them to schedule their lives and get things done.

With the Magic BusÂ app, the students have provided a life-changing solution. The students tested the app in Nairobi–and they already have bus drivers and commuters eager to use it. All but Omondi will be moving to Nairobi this fall. He will join them after he graduates.

The Earlham team was one of 25,000 entries from student teams around the world.

To learn more about the Hult Prize, go here.