This App Makes Cooking and Nutrition Fun and Easy 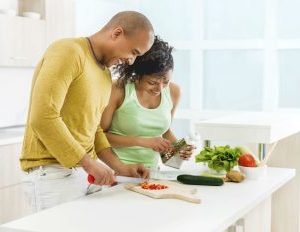 Health statistics for the black community should raise alarm, especially considering type-2 diabetes and obesity, in many cases, can be prevented through eating a healthy and balanced diet. In response to America’s troubling health grade,Â  African American brothers and entrepreneurial team, Justin and Terry L. Raimey, have launched the Black Streak Kitchen mobile app.

Black Streak Kitchen is changing cooking and nutrition education by presenting these subjects through comics and animation, as it takes a new approach to presenting recipes, teaching cooking techniques, and teaching responsible eating habits. Through the Black Streak app, the brothers publish recipe comic books, animated nutrition fact videos, and kitchen safety music videos featuring original characters to teach kids and families about cooking, nutrition, health, and wellness. At first glance, the concept may sound unorthodox–maybe even crazy. However, as we know, most great movements appear strange at first glance, but quickly catch fire and change the way people live their daily lives.

“There is a need for this app in America, especially among African Americans,â€ says Terry. “Parents are cooking less, and feeding their families more fast food and takeout. This, of course, has led to rising rates of obesity, type-2 diabetes, and hypertension in adults and even children. Black Streak Kitchen’s goal is to teach kids and families how to cook delicious meals, and inform them of the nutritional benefits of the ingredients within each recipe. Food and nutrition education is important to leading a healthy lifestyle.â€

These brothers planÂ to change the way America views cooking and nutrition goes beyond their groundbreaking app. Justin and Terry are using the Black Streak Kitchen app to promote their upcoming monthly comic publication Black Streak Kitchen Comics, which will deliver recipes in the form of digital comic books to subscribers every month. Each issue will have four comic recipes: two with meat and two vegetarian. Food diversity is also promoted through the digital comic series, as issues will also feature dishes inspired from different cultures and countries around the world. Terry and Justin have even teamed up with internationally renowned celebrity chefs, like Chef Ed Harris, who will be featured as characters presenting their original recipes within the comics.

Black Streak Kitchen certainly has the potential to change how cooking, health, and wellness is presented worldwide. As time moves forward, it will be exciting to see how the Raimey brothers will lead this new culinary movement, with their creativity and innovation.

Dr. Dionne Mahaffey is an Atlanta-based writer, business psychologist, and the founder of The WhereU app. Â Follow her on Twitter @ATLcelebrity @WhereUCameFrom