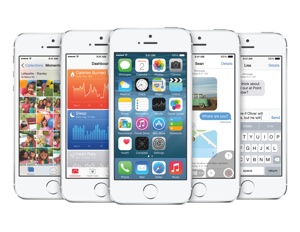 Apple's iOS 8 does a lot to address long-held complaints while providing new features for developers and consumers.

The company’s newest operating system for its mobile devices brought a healthy dose of new tools for developers, as well as many consumer-facing improvements.

The company called it their “biggest release since the launch of the App Store,” in a press release today.

Tim Cook, CEO of Apple, was on stage to greet the audience of developers, but let Senior Vice President of Software Engineering, Craig Federighi, lead the lion’s share of the event.

“iOS 8 offers simpler, faster and more intuitive ways to use your device with incredible new features like iCloud Photo Library, a new Messages app, the QuickType keyboard and an entirely new Health app,â€ said Federighi. “We’re also giving developers amazing new tools to make managing your health and your home from your devices an integrated, simple and secure experience.â€

While there were many tools for developers announced, there were some important updates and features introduced to iOS 8.

Apple’s newest notification update allows you to interact with certain app notifications straight from the lock screen, or wherever you are. If you receive a text message, you can pull it down, type, send, or speak your response, and send it, all without leaving whatever app you’re in. Federighi used the demo to bid on a guitar from eBay, as well as like a post on Facebook.

Instead of relying on Apple’s own keyboard, the company has finally allowed third-party developers to bring their keyboards to iOS. With this addition, keyboards like Swiftkey and Swype could be ported to iOS and provide users with multiple keyboard options.

Got a house full of iOS devices? If they’re all connected to the same bank card, Family Sharing will allow you to give everyone access to each other’s content. This makes sharing content in your home (or with a previously held iTunes account) easier and more secure. If you don’t want your kids racking up a huge App Store bill, you can have their phone set up to ask the cardholder for permission before purchasing anything like a song or app.

Apple announced the rumored HomeKit, a home automation protocol that makes your iPhone the hub for your connected devices like garage doors, locks, thermostats, and lightbulbs. You can even use Siri to set up routines when you relay certain commands. “Go to bed” could dim the lights, lower your home’s temperature, and lock all your doors instantly.

Enterprise gets a boost:

Apple claimed that over 90% of Fortune 500 companies use iOS devices, and that they were more secure than competing mobile devices. The company announced new data management and device management tools for the enterprise, and lets companies issue iOS devices without worrying about data breaches, thanks to password protection, S/MIME for emails, and VIP mail threads.