Apple Announces the iPad 2 at the Same Price 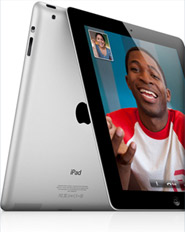 With several tablet competitors nipping at their heels, Apple Inc. punched up their game today with the introduction of the second generation iPad, formally the iPad 2. It will feature 1GHz dual-core Apple A5 processors and dual front and rear-facing cameras in a smaller and lighter package, all for a starting price of $499, the same as the original iPad. One of the more surprising developments is the device’s availability in two colors: black and white.

Despite having taken a medical leave of absence, Steve Jobs appeared before a packed room of reporters and bloggers to announce the highly anticipated updates that have been rocking the blogosphere for the past two weeks.

Jobs spent the first five minutes of his presentation taunting tablet rivals and touting the “magicalâ€ success of the original iPad, which sold 15 million units and earned $9.5 billion in revenue between April and December of 2010. “We’ve never had a product that got off to that fast of a start,” he said of the iPad, which has over 90% of the tablet marketshare.

Going from 13.4mm to 8.8mm in thickness, the iPad 2 is 33% thinner than both its predecessor and the iPhone 4, but, at 10 hours, the battery life will remain the same. It’s also lighter; down to 1.3 lbs from 1.5 lbs. The shape of the iPad 2 has also changed slightly from boxed to beveled edges. Storage capacity for both WiFi and models with WiFi plus 3G are available as 16GB, 32GB, or 64GB at the same pricing structure as the first iPad.

New to the iPad 2 is a nitro Javascript engine, which will provide graphics at nine times the previous speed. This is a great upgrade for gamers and those interested in editing video using iMovie, which will become available for the iPad 2 when the new iOS 4.3 is unleashed on March 11.

The iPad 2 will also come with some novel accessories, including the magnetic, snap-on/off iPad Smart Cover, which puts the iPad 2 to sleep and wakes it up. Another feature that will make it competitive with other tablets is the Apple Digital AV Adapter that provides an HDMI out port so users can connect the iPad to a TV, monitor, projector, or LCD display. It also works with audio. The rear camera will shoot at 720p HD and the still camera will have 5X digital zoom, while the front camera is VGA quality for both video and still shooting.

Changes made based on user requests include a software preference to use the switch on the right of the iPad 2 as either a volume mute or a screen orientation lock. Airplay improvements allow home sharing, which lets you see other iTunes libraries from your device. Finally, as a personal hotspot, the iPad 2 will be able to connect other WiFi devices to the Internet. The iPad 2 will be available for both AT&T and Verizon on March 11, but no mention was made as to whether 4G/LTE speeds will be available for the iPad 2. There is no pre-ordering for the device.

Despite the new updates, not everyone is thoroughly satisfied. The iPad 2 does not come with an enhanced retina display like the iPhone 4, nor does it have an SD card slot or support for Flash. The screen resolution of 1024 x 768 is also not as impressive as some of its Android competitors, like the Motorola Xoom, which is at 1280 x 800. Also, Apple did not say how many megapixels the cameras will have.

As Twitter updates about the new iPad were abuzz with excitement and awe, Thaddeus Howze, an IT veteran with 28 years in technical services, network and IT administration, thought the upgrades were an “incremental upgrade, at best.â€

“The iPad 2 will have slow upgrades [that] they can sell until they reach near-perfection. Customers are paying beta testers,â€ he said via his twitter account @ebonstorm. “In my technology buying experience you get what you pay for. If you are truly trying to make this device work for you, you are going to spend about $800 plus tax for the fully functional device.â€

In other words, despite its low introductory price the iPad 2 can only compete with rivals at its higher end prices; especially when you take 4G into account. But as expected, prices for the first iPad have been discounted. Consumers can buy a refurbished 16 GB iPad for $349 or a new iPad for $400. And as history has proven, price usually wins out over specifications.