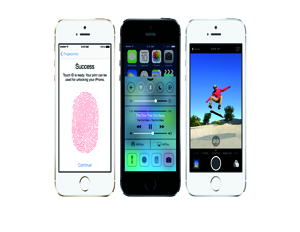 As many suspected, Apple announced the iPhone 5C and the iPhone 5S during its big reveal on Tuesday, but those weren’t the only reasons to get excited. The Cupertino, California-based company also released the launch date for iOS 7: September 18.

The redesigned version of Apple’s iPhone and iPad software will be free and come with more than 200 features. Â It will be supported on iPhone 4 and later, as well as iPad 2 and later, the iPad Mini and fifth generation of the iPad Touch. The mobile operating system is being called “the biggest change to iOS since the original iPhoneâ€ by Apple and boasts more convenient search and better multitasking, greater gesture controls, new fonts and icons and a greater camera functionality that includes built-in filters. The software is completely different with apps such as Mail, Calendar, Music, Photo and Camera all taking on a new feel.

And the neat features didn’t stop there. Offered in a bevy of colors, including white, blue, green, red and yellow, the iPhone 5C will go on sale on September 20 and pre-orders start this Friday, September 13. This smartphone design is made of plastic, has a hard-coated polycarbonate design and a 4-inch retina display. It retails at $99 for a 16GB model or $199 for a 32 GB model under a two year contract. The tech giant debuted a selection of colorful, silicone-rubber cases starting at $29. The next in the flagship familia, the iPhone 5S, is the first 64-bit smartphone–thanks to its upgrade to an A7 chip.

“The PC world made the transition from 32 bit to 64 bit and it took years. Today you’re going to see that Apple is going to do it on one day,” said Phil Schiller, Apple senior vice president, at the big reveal.

Schiller said the iPhone 5S will have a longer battery life than its predecessor, and will have a reported 10 hours of LTE and Wi-Fi browsing, 40 hours of music and 250 hours of standby. Its central processing unit (CPU) performs 40 times faster than the original iPhone. The new iPhone will also include a brand new chip called the M7, which is said to constantly measure motion data, keeping track of the device’s accelerometer, gyroscope and compass.

The camera is getting a huge upgrade (prepare to be wowed), capturing more light, detecting the white balance upon launch with True Tone flash, image stabilization, slow-mo and best shot selector capabilities. As the rumors suggested, the 5S comes with a fingerprint sensor built into the Home button which can be used to unlock the device or make a purchase.

BlackEnterprise.com caught some of the chatter surrounding #Apple, #iPhone5C and #iPhone5S:

So no iWatch? RT @ricktagious: Oh snap. New iPhone 5S has wearable fitness tech in it.

That camera makes it HARD to switch to another platform #iPhone5S – Terrance Gaines (@BrothaTech) September 10, 2013

10 hours of LTE browsing? I’ll believe it when I see it.

jokes aside, i like other ways to secure your phone besides passwords. Tech giants have been looking to get away from pwds for awhile

Have to admit: The ability to record in slow-motion seems like it will be really fun for the Internet