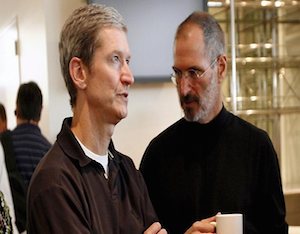 In a revealing and very powerful essay written for Bloomberg Businessweek, Apple CEO Tim Cook confessed his sexuality for the world to read.

The 53-year-old business executive from Mobile, Alabama, said that he never denied his homosexuality, but has never publicly discussed his preferences until now, writing, “So let me be clear: I’m proud to be gay, and I consider being gay among the greatest gifts God has given me.”

The essay, which was published Thursday (October 30), also found him reflective, describing how his sexuality gave him an acute social perspective. “Being gay has given me a deeper understanding of what it means to be in the minority and provided a window into the challenges that people in other minority groups deal with every day,” Cook writes. “It’s made me more empathetic, which has led to a richer life. It’s been tough and uncomfortable at times, but it has given me the confidence to be myself, to follow my own path, and to rise above adversity and bigotry. It’s also given me the skin of a rhinoceros.”

A trait that comes in handy especially when you’re the main person in charge of running a conglomerate such as Apple. The revelation comes on the eve of Cook advocating for LGBT (lesbian, gay, bisexual and transgender) rights in his home state of Alabama. “[Alabama is] still too slow on equality for the LGBT community,” he said, per the Associated Press, while calling for laws protecting people based on sexual orientation and gender identity. Under Alabama state law, citizens can be let go from their positions of employment based on their sexual orientation – a fact that Tim Cook aims to change. “We can’t change the past, but we can learn from it and we can create a different future.”

Cook has never publicly come out even though rumors and speculated persisted ever since he took over the position from the late Steve Jobs. In May, the New York Times tried to get to the bottom of the situation through their story titled, “Where Are The Gay Chief Executives?” and had to define their position of “openly gay”. While it wasn’t whispers or innuendo that led to Cook coming out, it seems that by being the gay CEO of the world’s most profitable tech company may actually serve as inspiration for others in the LGBT community to come out.

“I don’t consider myself an activist, but I realize how much I’ve benefited from the sacrifice of others. So if hearing that the CEO of Apple is gay can help someone struggling to come to terms with who he or she is, or bring comfort to anyone who feels alone, or inspire people to insist on their equality, then it’s worth the trade-off with my own privacy.”

Speak on this issue, Black Enterprise readers: Does Tim Cook coming out as gay change your perception of the product? Are you excited for what this means for Apple and the way its branded to the LGBT community?