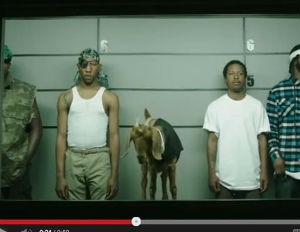 Have you seen the Mountain Dew ad depicting a bloodied white woman as she is asked to finger her attacker from a lineup of black men? Whether you have or not, would it then surprise you that it was directed by oddball rapper Tyler, The Creator?

Tyler and PepsiCo became the latest ad creators to spark outcry from watchdog groups who say TV and web ads are becoming too racist and are making light of serious societal problems, reports the New York Times.

Advertising experts say the reaction and backlash isn’t shocking because companies are desperate to find new ways of reaching millenials.

“It’s the pressure to create ‘viral’ advertising, the urge to get more views online, that leads people to push the envelope,â€ Tor Myhren, president and chief creative officer at Grey New York, told the Times.

The pushback is coming from civil rights leaders like Al Sharpton, who this week held a meeting with PepsiCo executives and the family of Emmet TillÂ – the teenager whose 1955 murder in Mississippi sparked the civil rights movement.

You might remember that Mountain Dew last week dropped its multimillion-dollar endorsement deal with Lil Wayne, after the Till family and others took issue with a song that referred to Till with vulgar lyrics sung by the rapper.