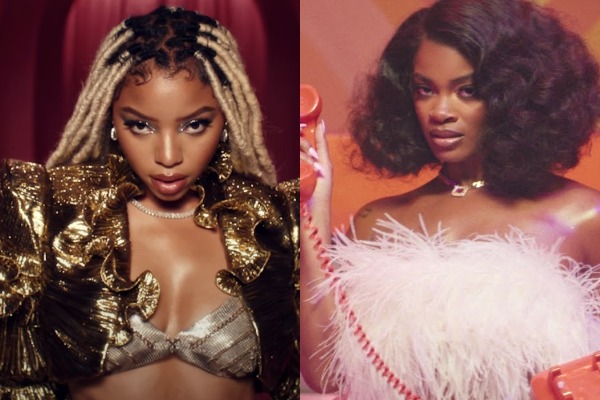 Unveiled on the same day, Chloe and Ari both showed extra skin in the visuals for the singles “Have Mercy” and “Pressure.” Chloe continued with the more risque appeal she debuted during her Soul of A Nation performance in June.

Chloe’s “Have Mercy” puts her curvaceous figure on full display as she twists, dips, and claps her cheeks for all to see. To further confirm the Beyoncé stamp of approval, Mama Tina Lawson makes a special guest appearance in the video as Chloe and her dancers perform a sorority girls’ number.

Meanwhile, Ari toned things down a bit while still keeping it sexy for her 50s inspired “Pressure” video. Ari took on a Supremes-inspired look, a Donna Summer ensemble, and a seemingly TLC “No Scrubs” type of persona for the visuals.

Being blessed with two new singles and videos from some frontrunners in R&B led to debates on social media. But Ari wasn’t here for the narrative one of her fans tried to paint of Chloe.

In a since-deleted tweet, Ari shut down her own fan, who accused Chloe of displaying “light-skin privilege” and garnering more YouTube views than Ari.

“Chloe’s new video has over 5 million views while Ari Lennox who has the better song and more tasteful video hasn’t even hit 1 million views yet,” one critic said in a tweet captured by Vibe.

“Chloe’s light skinned privilege is showing. Thank God she bussed it down, now she has the attention she’s been craving.”

But Ari wasn’t having it. She responded to her fan, telling them to cut it out with the comparisons and fan-made beef.

“Please delete this hateful think piece,” Ari said. “It’s negative and counterproductive and creating unnecessary backlash for both Black women. Chlöe and her music video are legendary and on REPEAT over here. Pressure is doing just fine.”

In a follow-up, Ari blasted the critic for being “divisive” of two successful performers and Black women in the industry.

But that’s NOT what this is, Chloe worked incredibly hard and shouldn’t be disrespected. She deserves her flowers,” she said. “I will not tolerate this divisive sh*t.”

But that’s NOT what this is, Chloe worked incredibly hard and shouldn’t be disrespected. She deserves her flowers. I will not tolerate this divisive shit https://t.co/BvdjjJHvMj

It looks like people can leave Ari’s name out of the fake feuds. She’s choosing peace.