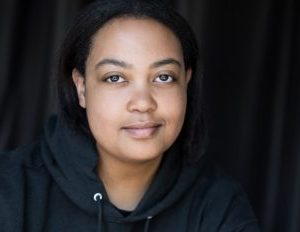 We both share very similar, yet rare career path transitions. She is transitioning from management to venture capital, and I, from directing to tech entrepreneurship–all of which are fields mainly dominated by men. So, I was very excited to sit down with to dig more deeply into her story, on behalf of BLACK ENTERPRISE.

BLACK ENTERPRISE: What got you interested in starting a venture capital fund?

Hamilton: I worked in live music production, on tour, around 2012. I started becoming very curious about Silicon Valley and startups in general. While in Texas, I started remotely helping companies on small projects, and that turned into me remotely helping them connect with investors.

Over time, I started noticing a pattern. If I sent certain pitch decks that showcased companies with an all white, male team, they would get to the next step, no matter what they were building. If the company had someone of color or a woman, there would be a push-back about not understanding the market, no matter what the market was.

I started realizing that I was seeing a lot of companies very early, and I had a lot of trust with those founders, and we related well to each other. There was an opportunity there, and if I could put together some sort of pool, I could probably make money investing in companies that were overlooked.

BE: What did the process look like, when you were transitioning out of where you were with music, to creating this fund?

Hamilton: I never transitioned out. I still am a tour manager for one artist and that’s really worked out well, but it took me years to get the first check. It took me a long time to make it happen.

Summer of 2014, I realized I would have to be all in, because it was such an uphill battle. So, I stopped taking tour money for a short period of time. When I decided to focus, I got my first check from Susan Kimberlin, a former executive at Salesforce, and she is now our venture partner.

BE: Who are some of your other limited partners?

BE: Where didÂ  your relationships with these superstar investors come from?

Hamilton: It was seven days a week, 365 days, for three years of network building, being tenacious, and letting people see me over and over again.

For example, I started talking to Chris Sacca over three years ago. I would email, and he would always answer, or I would bump into him, and we would talk about it. At first, he was like, “Why don’t you work for a fund?”Â  I told him, first of all, it’s really, really competitive, especially for people with my background. Secondly, you did it [this way], so why shouldn’t I?Â  Finally, he had an ‘ah-ha’ moment, and a few weeks later, he invested.

Marc Andreessen actually retweeted a blog post that I wrote. He said it made him think about something in a different way. So, I took that opportunity to say, “Can I direct message you with one question?” which I did. The question was, “Will you invest in my fund?” He called up everybody that was listed as investors–they were all friends of his–and he came in, too.

Stewart Butterfield focuses a lot of diversity, and has it baked into the DNA of his company. He was very proactive in finding me, with very little fanfare, and did so without expecting much in return. I kind of talk about it more than he is probably comfortable with, because he’s just doing it. He just believes that this is how it should be.

Everyone has their steps, but it took time for it all to come together. 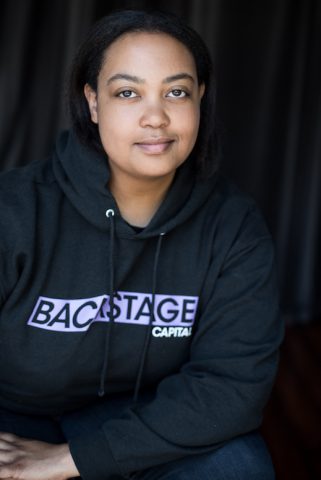 BE: What types of companies do you see Backstage Capital investing in?

Hamilton: They come from all over the country and from all different sectors of their industries. We’ve invested in 19 companies since last November, and we will probably have 40 or so companies in this fund before we’re done. We have everything from snap-on nails, to facial recognition, and beyond. The stuff that’s in our pipeline is even more varied than what’s on our website.

BE: What is the maximum size of an investment?

Hamilton: We invest between $25,000 and $100,000, on our first check. We also do syndicates, so we’re willing to invest like another $200,000 through Angel List, on top of our first check. We realize that $50,000 in an angel-sized check won’t move the needle too much, but, sometimes, it’s about the timing. Sometimes it’s right on time for people. In a few cases, it’s stops some companies from going under. In addition to that, we try our best to connect people will more investors, so our $50,000 check can feel like a half a million.

We also just started a new initiative to invest $5,000 into several companies across the country, and partner with tech hubs in different cities, after realizing that there is a lot of impact there, as well. In a lot of cases, underrepresented founders don’t have friends and family, who can open up a checkbook and write a $5,000 check. Sometimes it’s just about being a part of a network, having someone on your team, and having that little bit of cash to legitimize what you’re doing. We plan on making that a feeder for our larger fund.

Sequoia Blodgett is the technology editor for Black Enterprise, Silicon Valley. She is also the founder of 7AM, a lifestyle, media platform, focused on personal development, guided by informed pop culture.