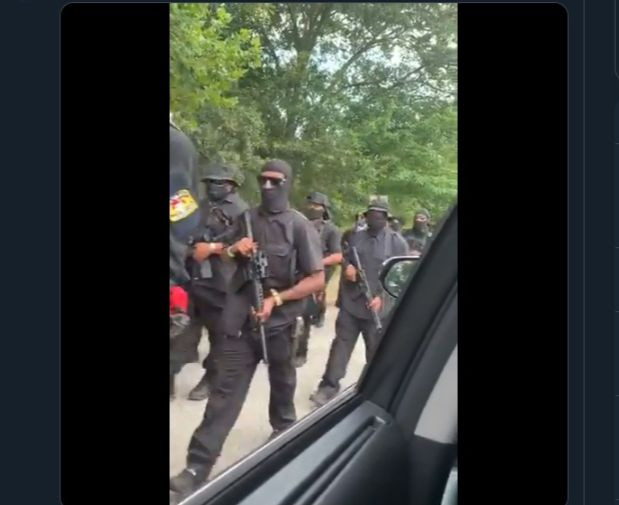 A heavily armed Black militia group made a statement by marching through Stone Mountain Park in Georgia near Atlanta on July 4, insisting on the removal of the giant Confederate monument that’s prominent at the site, according to Reuters.

A spokesman for the Stone Mountain Memorial Association, John Bankhead, stated that the armed protesters were peaceful and orderly.

“It’s a public park, a state park. We have these protests on both sides of the issue from time to time. We respect people’s First Amendment right,” Mr. Bankhead told 11Alive.

“We understand the sensitivities of the issue here at the park … so we respect that and allow them to come in as long as it’s peaceful, which it has been.”

Newsweek reports that the group, which calls itself the Not F—ing Around Coalition (NFAC), is demanding the removal of a nine-story high sculpture that features the likenesses of Jefferson Davis, who was president of the 11-state Confederacy, and two of his generals, Robert E. Lee and Thomas “Stonewall” Jackson. The sculpture is located at the state park in Stone Mountain, Georgia, a 20-minute drive east of Atlanta.

NFAC Founder Grand Master Jay spoke to Newsweek over the phone earlier this week and informed them that the group is “100 percent Black” and is not affiliated with Black Lives Matter. “We are a Black militia. We aren’t protesters, we aren’t demonstrators. We don’t come to sing, we don’t come to chant. That’s not what we do,” he said.

“Our initial goal was to have a formation of our militia in Stone Mountain to send a message that as long as you’re abolishing all these statues across the country, what about this one?”

“It was all Black … there were no brown people, no white people… everyone was Black. I am not a protester, I am the commanding general of my militia, we were swearing in new members,” he added.