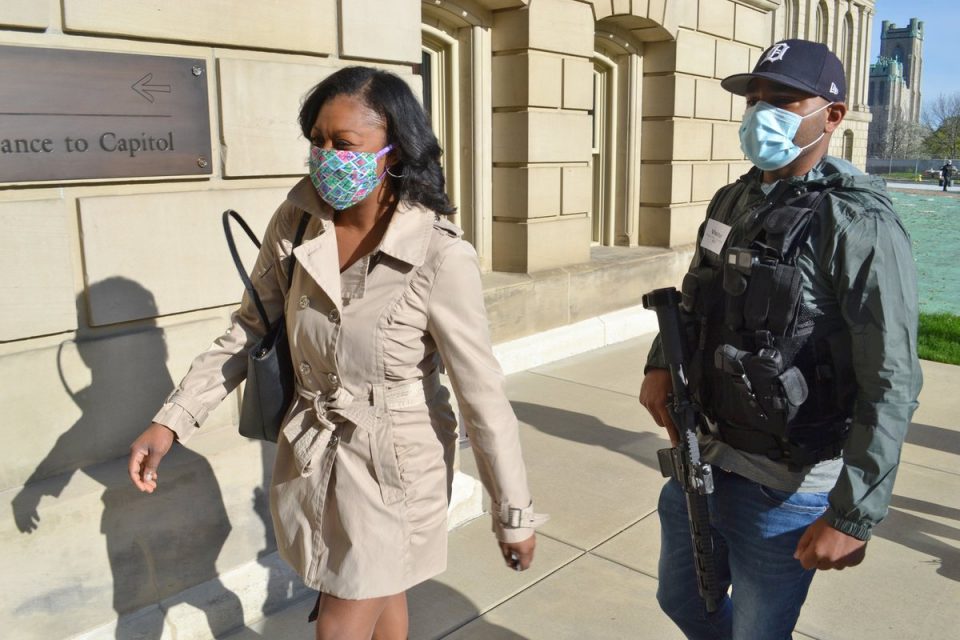 Rep. Sarah Anthony is being escorted to the state capitol by an armed militia. Photo courtesy of Twitter

An African American female lawmaker was escorted to the Michigan Capitol Wednesday by an armed security detail of volunteers following an anti-quarantine protest.

According to Blavity, Rep. Sarah Anthony (D-MI), was escorted to the capitol by an all-black entourage, at least three of whom were carrying rifles. Anthony said she didn’t ask for the escort but felt comforted by the presence after what happened last week.

“We were all just appalled by the lack of support and lack of security that I had, that other legislators had,” Anthony said to Blavity. “And the fact that a lot of the demonstrators last week were adorning many racist, anti-Semitic signage. I think it just triggered a lot of folks, especially African Americans.”

On April 30, anti-quarantine protesters stormed the capitol, and in a recording Anthony posted to Facebook, many of the protesters were carrying rifles and assault weapons. The protesters were organized against Michigan Gov. Gretchen Whitmer’s stay at home order.

Many of the protesters were pushing the governor to reopen the economy in the wake of job losses and store closures. However, the protests have also attracted a wide variety of groups dedicated to other causes, such as gun-rights activists and white supremacists.

Michael Lynn Jr., a firefighter and community activist, organized the armed detail for Anthony after watching the video she posted to Facebook. Lynn said the Neo-Nazi and white supremacist signs he saw bothered him.

“I could hear the fear in her voice during that protest,” Lynn said. “It was the visual of her being that scared to go to work. It meant we had to do something. We came out here today to make sure we could provide some protection, even if it’s only just to make her feel better.”

“Unless government prohibits the event during this time, we allow it to be organized on Facebook,” spokesman Andy Stone said. “For this same reason, events that defy government’s guidance on social distancing aren’t allowed on Facebook.”