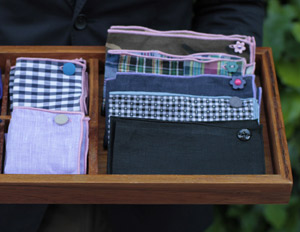 A sampling of what Armstrong & Wilson have to offer

Outside of fabric, color and shape, pocket square designs haven’t changed much over the years. Enter Armstrong & Wilson, a trendsetting pocket square line that’s garnered attention for its unique take on the men’s accessory item with its signature button detail. Founded in 2009 by Esquire‘s “Best Dressed Real Man In Americaâ€ finalists Clifton Wilson (2006) and Ontario Armstrong (2009), the line has become the toast of the men’s fashion blogosphere, with prices that range from $55 for cotton and $110 for cashmere. For this installment of Suit Your Life, Â BlackEnterprise.com caught up with the Philadelphia natives to discuss how they got started in the business, what makes their brand unique, and why every man needs to treat his pockets right.

Were you gentlemen working in fashion prior to the Esquire contest?

Wilson: At that time, we were both working at Nordstrom’s department store. I was working in the suit department and I heard about the contest from a gentleman who came into the department store to buy an outfit for the contest. What was so funny is that he mentioned that Esquire was having this contest and gave me the details and location. I went over on my lunch break, this was in 2006, and that’s how I won the [preliminary] contest to make it into the finals.

What was the inspiration behind launching Armstrong & Wilson?

Armstrong: We started Armstrong & Wilson in 2009 after a few other business ventures in the past. We wanted to start something that was economical for us and we noticed that men were getting back to those finer details in their look. We wanted to do something that would compliment that look, but with our own unique twist, thus came the idea of the button. We focused on our signature button detail to give the pocket square a life of its own and make it the focal point of every man’s look.

What role do you believe the pocket square plays in the modern businessman’s wardrobe?

Armstrong: I think it’s that final touch. It gives that impression that that gentlemen knows what he’s doing. To be able to pull your tie, your pocket square, your socks, your suit, and make all those things work together as one unit shows that that man knows fashion. I think our pocket square adds much more detail to when a man puts that look together. Now it plays a major role because it shows that this guy has all the components of a well-dressed man.

How has the public and the fashion industry reacted to your reinterpretation of a classic menswear staple?

Wilson: As far as the public, we have been featured on so many different [fashion] blogs; we have gotten orders from the Netherlands to Hong Kong and many other different parts of the world in between. At first, they needed to warm up to us, because it was such a unique idea. Now the public has really embraced us, just because we feel we have created something that has never been done before and you can wear it so many different ways. It was a little slow in the beginning but now it has been a huge success for us and with us just focusing on the pocket square, we are giving the pocket square a name, the pocket square now has its own leg to stand on. That is definitely a good start for us.

Someone once asked me what I did for a living and I gave them the simplest answer I knew, "I panhandle, shop, and telemarket". A slightly more complicated answer is that I am the Co-Managing director of a nonprofit, Hearts4Haiti Global initiative (H4HGI) that raises funds through large-scale fundraising events, grants, and partnerships to create, implement, and oversee programmatic initiatives in Haiti. Iâ€™m also an image consultant that counsels individualsâ€”primarily men and corporate clientsâ€”on appearance, behavior, and communication skills through individual consultations, coaching, presentations, seminars, and workshops. Lastly, in my free time I write about my two passionsâ€”fashion and travelâ€”in my Suit Your Life column here on BlackEnterprise.com.