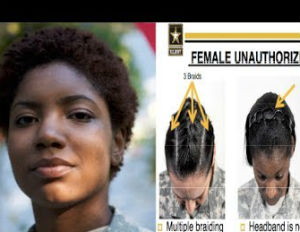 African American women in the United States Military may soon be able to resume wearing their hair in twists, large corn rows and dreadlocks.

This after the Army recently issued new grooming regulations that included controversial changes in how military women can wear their hair. The new rules include bans on variations of the hairstyles mentioned above, many of which are popular with women of color.

Not long after the new grooming regulations were announced the complaints began piling up. With many people saying that they were “racially biased.”

The Washington Post got to the root of the matter saying several black females feel there is “a lack of understanding about black hair, coupled with a norm that uses the hair of white women as its baseline. While black hair comes in all textures, much of it is deeply curly, making it difficult, unless chemically straightened, to pull back into a bun or to hang loose off the face in a neat, uniform way.”

Hagel says he is taking concerns that the new military mandates on how hair should be worn unfairly targets black women, “very seriously.”

He was responding to complaints submitted by all 16 women of the Congressional Black Caucus who asked the Defense Secretary to overturn the regulation on behalf of more than 25,000 African American women on active duty in the Army.

RELATED: U.S Army and Black Women at odds over hairstyles

The New York Times reports Hagel says he has given military leaders within the Marines, Air Force, Navy, and Army three months to review comprehensive military regulations as they pertain to black women “to ensure standards are fair and respectful of our diverse force.”

According to the Washington Post, the regulations are among new grooming standards that critics say are meant to further weed people out of an Army reducing its size from post-9/11 numbers in the years to come.

Rep. Marcia L. Fudge, the Ohio Democrat who is chairwoman of the Congressional Black Caucus, said she had been struck in recent visits to military bases by how many soldiers – black and white – said they felt they were being pushed out of the military. Fudge also told the Washington Post, “One of the things they should not do is insult the people who’ve given up their time and put their lives at risk by saying their hair is unkempt.”

Hagel also addressed this issue, ordering the military to review the definitions of authorized or prohibited hairstyles and scrub those definitions of “offensive language,â€ from the Army’s new regulations including the words “unkemptâ€ and “mattedâ€ in reference to braids, cornrows and dreadlocks.

Army officials insisted the updates on grooming were cleared by a focus group that included black women in the Army, but they have declined to give their names or make them available for comment.

Rep. Barbara Lee, a Democrat from California who, according to the New York Times first brought the issue before the CBC says “I’m pleased that the secretary responded in such a forthright manner, we have to be vigilant until we have a final conclusion.”