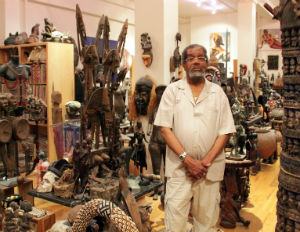 Nestled in the heart of Bedford-Stuyvesant, Brooklyn, New York, is a $10 million African art collection owned by Eric Edwards, a former AT&T executive. “My love for African history began as a child, but I didn’t start purchasing art until the 1970s, said Edwards.â€ I had no intentions on becoming an art collector. I initially brought African art because it gave me peace and tranquility when I left my everyday life working in New York City.â€

But after spending more than 40 years collecting artifacts that represent 54 countries of Africa, and 4,000 years of history, Edwards realized his private collection needed a home. Now Edwards is on a mission to open “The Cultural Museum of African Art.â€ “The principle of the museum is based on the West African Sankofa principle: You don’t know where you are going, if you don’t know where you’ve been,â€ said Edwards. The museum will feature his private collection of more than 2,000 pieces of African art, a world-class library, youth education programs, and a research and media center.

BlackEnterprise.com caught up with Edwards to learn more about his plans for opening a museum and tips for investing in African art.

BlackEnterprise.com: Where does your love for Africa come from? Who has inspired you the most?
Edwards: As a child my parents inspired my passion for Africa, especially my father, who was an immigrant from Barbados. During that time, because of the state of racism against people of African descent in the United States, he was very concerned about what we, as children, would encounter as we entered the public school system in New York City. He was certain we would not be able to learn about African culture and history as he had in Barbados. So he took it upon himself to teach his children everything about African history and its many gifts to the world.

Tell us about the experience that inspired you to purchase your first piece of art.
I also have a passion for audiophilia—high-fidelity sound and equipment. Many years ago, I was a member of the two top audio files society in New York. We would have meetings at different members’ homes in the tri-state area. These people were doctors, engineers, scientist, psychiatrist, etc., who had a passion for music. While visiting their impressive homes, I started to notice a lot of African art. These people were of non-African descent. I asked them how they acquired their pieces of art and they told me about art galleries and auction houses such as Sotheby’s and Christie’s. I immediately became totally absorbed with artifacts and what they represented. The passion never ended.

One day while on my lunch break at AT&T, I took a walk through the SoHo area and I came across an African art gallery. I fell in love with a maternity figure from the Ivory Coast–a woman holding a baby [while] sitting on a birth chair. I purchased it for $300. I just put it on my desk at my office. But looking back I had no clue that this would ignite a flame in me to start a collection.

What do you look for when purchasing art? Do you have a preference for a certain time period?

For over 40 years, the one thing that I look for is the history behind each piece.
At the same time I started collecting art I started purchasing books on African history. I built a library just as powerful as my collection. I wanted to know everything I could about each piece.

Not only is the art beautiful, it’s three-dimensional. Each piece was created for unique purposes such as utilitarian items that were used for everyday life–protection or warfare, religious, funerary or maybe even to honor a particular ancestry or system of royalty.