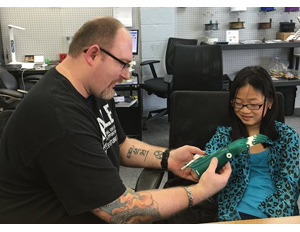 Robo 3D, a 3D printing company that specializes in printing prosthetics– which are artificial body parts–held its “Printing with a Purposeâ€ marathon campaign earlier this year.

During the event, the company printed 35 prosthetics and then donated them to the Â Enable Community Foundation, a global network of passionate volunteers using 3D printing to “give the world a helping hand.”

These donated prosthetic pieces were used in the Enable Community Foundation’s recent ‘Hand-a-thon’ event held on the expo floor during BodyHacking Con in Austin, Texas.

“Thirty-five prosthetic hands were put together during the event, with the majority of the pieces coming from Robo 3D,” said Melina Brown, director of case management and quality assurance for the Enable Community Foundation. “We are currently targeting the underserved communities of Latin America to receive them.”

“Since our company started around the idea of 3D printed prosthetics, it’s a natural progression for us to partner with the Enable Community Foundation,” said Braydon Moreno, Robo 3D founder.

“We encourage our own Robo 3D community to get involved and experience the impact one can make on someone’s life and make a difference through 3D printing.”

Robo 3D is a company sprung from a senior design project in mechanical engineering. The goal was to build a 3D printed prosthetic leg, which morphed into building a personal 3D printer, and then led to the creation of the Robo 3D.

Since 2012, Robo 3D has rapidly grown into a leading brand gaining significant traction through major online partners like Amazon and Best Buy. In May 2015, Robo 3D initiated an international rollout through the signing of distribution agreements in Canada, Latin America, and Europe.

ROBO 3D products are now being sold in all key international markets and units have shipped to over 2,400 cities worldwide.

3D printing is continuously being explored as a way to replace human body parts. Scientists have stated that printing limbs, but also muscles, bones, and even organs, is possible. Recently, scientists at Wake Forest University were able to print out living human body parts – including ears, muscles, and jawbones – using a combination of living cells and a special gel.

In 2006, the same science team made the first full organ, a bladder, and implanted it into a human. Rabbit penises were the first solid organs that the team built, reports NBC News.

FacebookTwitterYoutube
← Is the U.S. a ‘Land of Opportunity’? Part 1 ← Join the Fun By Participating in Black Enterprise’s Bring Your Lunch to Work Week
×
'