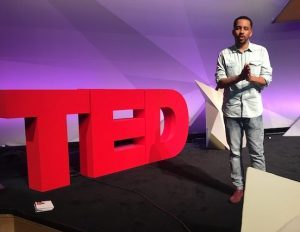 No one was ready.

Before the show, Black Enterprise sat down with Ise Lyfe to discuss his movement around popular culture consciousness and why tech needs to take responsibility for the displacement that it’s causing in communities. Â Â Â

Where do you fall when it comes to your placement in tech?

My career has always kind of been this dual lane where business and art meets tech so being here at IBM@TED is a cool intersection of those three things.

What have you been working on?

Over recent years, I’ve been working with Deloitte, Twitter, and I have a play right now that I’m doing with a tech writer at Google under my company, Lyfe Productives. Tech has major issues with diversity, and here in the Bay Area, it’s also impacting people’s human right to housing, so that’s what I’m focused on today.

What do you feel the biggest issue is with tech and diversity?

I have colleges from all around the world who figure out these amazing technologies with synthetics, with self-driving cars, and they tell me that they can’t figure out how to get more black and brown people in the office and the reason that they can’t, is because they don’t care.

They go to work without forgetting to stop at Starbucks. They care more about grabbing Coffee Bean then they do about an entire group of people in our society, so my work is to try to have an inviting, welcoming conversation around that, that’s measurable.

Why do you think that there are some POC who have “made itâ€ versus others who have not?

What do you plan to address today?

I plan to address the flag in the mud. These are tech companies or people who work in tech who come and kind of just stick a flag in the mud in communities as if they’re discovering them.

I will also address hope. There is anÂ opportunity for us to really set a standard and a bar for how we move forward. I hope to gain perspective and allies.

We have to be comfortable acknowledging that we’ve gotten to a place where displacement and gentrification across the country are here because people don’t care about the issue.

We have to make displacement a stigma.

The lights faded up and he was on. Before we knew it, heÂ was spittin’ verse after verse like a seasoned rapper as cello strings ripped through the background played by cellist, Michael Fecskes.

“Are you a modern day pilgrim on a cyber-Mayflower hopping off a chip instead of a ship with no regard for the indigenous,â€ his words rang through the air. Line after line. Each penetrating deeper than the last.

And then… it went silent. All of a sudden, a black woman stood up tall in the front row, fist high in the air and slowly… the rest of the crowd, of mostly pale faces, began to rise until Ise was met with a complete standing ovation. Â