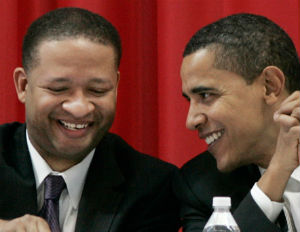 Former 2008 President Obama campaign co-chair Artur Davis seems to have had a change of heart of in the last 4 years.

The former Democrat turned Republican also responded to the comments made by vice president Joe Biden at a campaign stop in Virginia yesterday.

Biden said that if Romney were elected, the mostly black crowd would end up “back in chains.”

Davis said Biden knew exactly what he was saying and the comments were “racially divisive.”