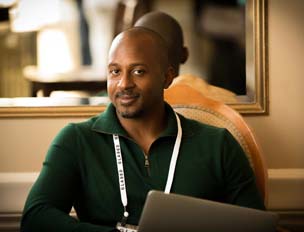 For me, what’s most amazing about the new, controversial SMS service,Â Anonymously Ask a Black Person, isn’t that it exists; but that its creator, Wayne Sutton, developed the site in a manner of days for a total cost of $106. He did it as an exercise to sharpen his development skills, and to see if he could start a desperately-needed conversation between races about our differences.

If you haven’t heard about AABP yet, here’s the scoop. The site, created by black-tech expert, Wayne Sutton, is marketed to non-blacks, and gives individuals the opportunity to anonymously ask a question–one that if asked publicly could result in ridicule or accusations of racism– via text message, and receive an “opinionatedâ€ answer from someone who is of African descent.

Sutton disabled the service 10 days after launching it because he considered it a social experiment. But so many people praised the idea that he decided to put it back up after 10 peers-–black techies–offered to help wade through the deluge of incoming questions.

“We decided that we would speak as individuals. I’m not trying to speak for all black people. We may or may not be qualified to answer every question, but as a black person we will give them our opinions. How can we break down barriers in race and culture, and in tech, [without a dialogue],â€ says Sutton, one of the original founders of the NewMe Accelerator.

From my perspective, the scenario, not the site, is a testament to the endless possibilities available African Americans skilled enough to understand how to build a Dev. Stack (i.e., development stack, a few pieces of software, often open source, that build the foundation on which you can build a digital project) using Php, MySQl, Javascript or Twilio API. It’s also proof that blacks have the skill-sets to build the same types of companies that receive million-dollar investments.

Sutton has been involved in this for the better half of 15 years or more, but tutorials on Web languages abound online, and Sutton himself admitted, that this was a relatively easy endeavor.