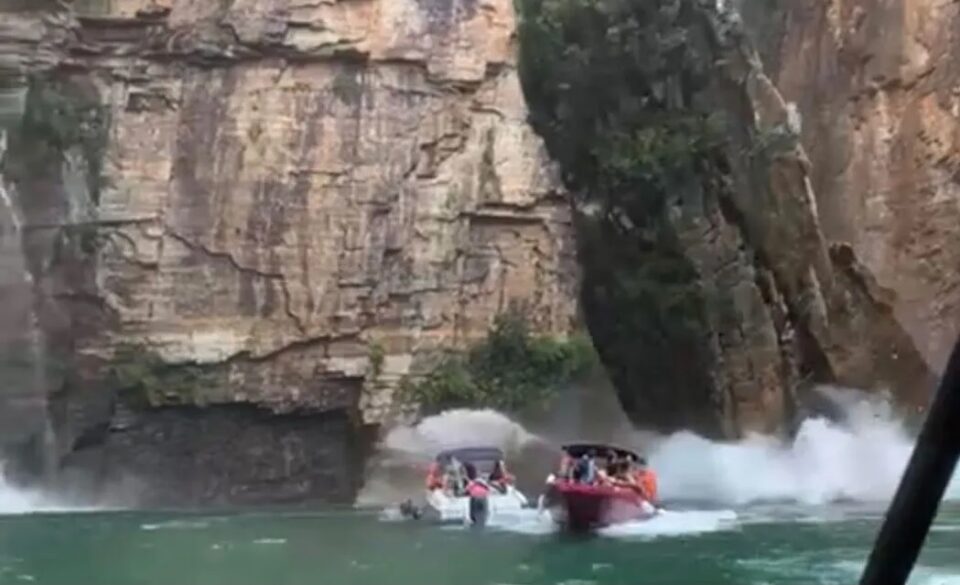 A search is underway for at least three missing individuals after a rock wall collapsed onto several leisure boats in a lake in southeastern Brazil on Saturday afternoon.

According to Reuters, seven people have been confirmed dead and nine people have been seriously injured in the tragic accident, which was recorded by a passenger on one of the vessels and shared on social media.

In the video, several boats can be seen at various distances from the wall as a large mass breaks off the coast and falls into Furnas Lake in the state of Minas Gerais. The rock fell directly onto two boats and caused a massive wave to impact the others.

As of Saturday night, Minas Gerais State Fire Department Commander Edgard Estevo told reporters that as many as 20 people were missing. However by Sunday morning, 17 of the missing had been reached by phone.

In total, authorities say 32 people were treated for injuries ranging from cuts and scrapes to broken bones. One person remains in serious condition after suffering sever injury to their head and face.

Furnas Lake is located between the towns of Sao Jose da Barra and Capitolio. The lake, which was created in 1958 as part of the installation of a hydroelectric plant, attracts about 5,000 visitors each weekend.

During high tourism seasons and holidays, as many as 30,000 visitors have been known to make their way to Furnas Lake in a two day span.

The rock formation may have been loosened by heavy rains, which have been impacting that area of Brazil for the last two weeks.

The rain also caused a containment dike to overflow at a nearby iron ore mine on Saturday, cutting off a major federal highway. However, authorities reassured the communities near the Pau Branco mine outside of the Minas Geiras town of Nova Lima that the overflow did not pose a threat of flood.