Athletes Who Have Business Savvy Significant Others 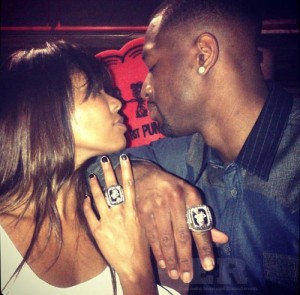 LeBron James. Dwyane Wade. Deion Sanders. Aaron Ross. These men aren’t only withÂ pretty-for-the-picture women, but women who are independently carving a place in the business world. From King James’s “sidekick” launching a nutritious liquid store to D-Wade’s new wife stamping her name on a luxury bottle of wine.

Savannah James
Back in 2013, Mrs. James opened her first store, The Juice Spot, in a neighborhood in Miami. She partnered with her trainer, David Alexander who she credits with instilling the love of healthy eating. The organic cold pressed juices range from $7 to $12. The website proudly highlighted their nutritious drinks: “We offer organic, raw, unpasteurized cold-pressed juice along with superfood smoothies and bowls.â€ With a five dollar minimum delivery fee, customers have the option to receive shakes without ever walking into The Juice Spot. Though, Savannah is married to one of the best business minded superstars, she made one thing clear to ESPN in 2013: “LeBron’s connection to my company is that he supports me. This going to be my baby.”

Gabrielle Union
Besides Union’s life on the silver screen, she has managed to crave out time to collaborate with Napa Valley Chardonnay to launch a new wine, Vanilla Puddin. The full bodied Chardonnay has aromas of carmelized apple, pineapple and butterscotch, according to the site. A bottle of Union’s signature wine is only $17, while a personalized bottle with the newly married star’s autograph is priced at $50. Just like her husband Dwyane Wade, the Mrs. is starting to make a dent in the business world.

La La Anthony
Some call La La and husband Carmelo Anthony the “First Coupleâ€ of the NBA. While the title is lofty, the pair has respectively earned the label. In 2011, Mrs. Anthony’s reality show “La La’s Full Court Life,â€ had close to one million people watch the first season finale, reported the Business Insider. The basketball wife pocketed millions from the show. Three years later, the former MTV VJ released a book, “The Love Playbook,â€ a relationship manual. Eventually, her name made it on the New York Times bestseller list, which generated more money and exposure. La La has used her brains to rake in more income, but now she has used her beauty-intellect. After noticing a void in the beauty market in catering to women of color, Anthony decided to develop beauty products for every skin tone, Anthony explained to Glamour. She teamed up with Motives by Loren Ridinger for a mineral-based makeup. In 2012, the beauty products company had sales of $13.76 billion.

Sanya Richards-Ross
The track sensation is married to Baltimore Ravens cornerback Aaron Ross. The couple tied the knot in 2010. Before her marriage, she was already planning to be remembered in addition to her sports accomplishment, “I don’t wanna only be known as Sanya the track star,” she told ESPNW. In 2013, she teamed up with WE television to release a reality show, “Sanya’s Glam & Gold,â€ the show followed the adventures and relationships of Richards-Ross and her family also her love life with Aaron Ross. There aren’t any reporting figures on how much Ross earned for her series, but some reality shows rake in millions. She has also appeared in NIKE commercials. The contracts have been worth between $12 million and $15 million over four years, according to Yahoo Sports.

Tracey E. Edmonds
She was already a successful businesswoman when she linked up with former football star Deion Sanders. Edmonds has a resume that’s peppered with entertainment experience, but she also has recently established herself as a producer. Edmonds who was married to songwriter Babyface, lent her talents to assist her boyfriend Deion Sanders’s docu-series, “Deion’s Family Playbook.â€ She is also working on a new film and is preparing for her first television hosting gig in Los Angeles.