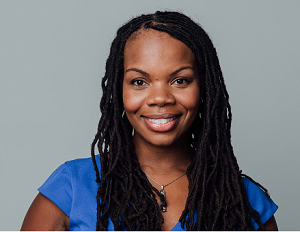 Growing up in Miami, Florida, Melissa Proctor discovered her love for sports early.

In high school, she set her eyes on becoming the first female coach in the NBA and got a job with the Miami Heat serving as the team’s first ball girl, a role that is now referred to as team attendant. Like most team attendants, Proctor washed towels, picked up beverage cups and played an essential role in ensuring game night ran as smoothly as possible for players, trainers and staff.

After graduating from Wake Forest University and being denied a job with the NBA, Proctor moved to Atlanta for a position with Turner Broadcasting, where she worked her way up to leadership positions in senior brand development and strategy. In September 2014, Proctor joined the Atlanta Hawks family as vice president of brand strategy before being promoted to senior vice president of strategy and, most recently, chief marketing officer.

BlackEnterprise.com: Talk about the female employee resource group you have at the Atlanta Hawks.

Proctor: I’m currently responsible for WIN (Women Inclusion Network), which is our employee resource group that launched this season. When I first started it, it was something I was very passionate about and when talking to [Chief Diversity and Inclusion Officer Nzinga Shaw] they were very interested. It’s not only a resource for women, but also men in the company to help understand how we can support women in sports.

How would you describe the state of diversity today for women in sports?

In going to a number of league meetings and speaking to people who have been apart of the league for years, it’s getting a lot better for women and for women of color. I feel like for us here at Atlanta Hawks, we are unique in terms of diversity of thought, but I still think there is a way to go. I do see a lot more opportunities, especially with digital and the way the industries are pushing forward. I think the NBA has been very strategic with reaching millennial audiences. With that I think there will be more opportunities for people who are interested in sports, or at least [the] NBA specifically.

What advice do you have for someone who is interested in having a career on the business side of sports?

Having an understanding of digital is critical regardless of what type of role they want. But what’s interesting is I really find that having extreme passion for sports can almost be a detriment, because sometimes people lead with that instead of strong assets for the position. So whatever role they want, I say show the mastery of that skill specifically without just the love for the sport or the team. We want extreme fandom but we also want extremely bright talent in the business part.