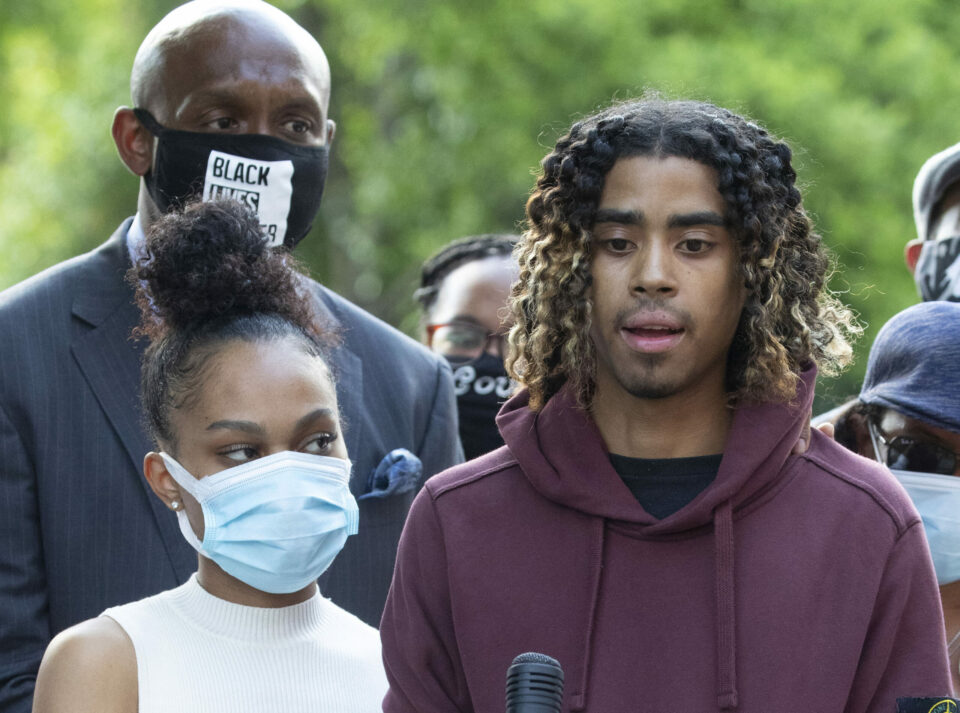 Taniyah Pilgrim holds Messiah Young's bandaged hand as he speaks during a news conference on the campus of Morehouse College Monday, June 1, 2020, in Atlanta. Two Atlanta police officers have been fired and three others placed on desk duty over excessive use of force during a protest arrest incident involving the two college students, Atlanta's mayor said. (AP Photo/John Bazemore)

Two years ago, six Atlanta police officers who were caught on video forcibly dragging two young Black college students out of their car during the end of a protest had been charged, according to ABC News. Now, according to NPR, those six police officers will not face any discipline as the charges against them were dropped.

The incident took place during a George Floyd protest in Atlanta in May 2020 after a Minnesota police officer Derrick Chauvin killed Floyd on a public street in front of bystanders. Footage from a phone went viral. The six Atlanta police officers were accused of using violent and excessive force against two college students after the video of the assault went viral.

On Monday, the Atlanta district attorney announced that all charges against the officers were dropped because the actions that the police officers performed were right on par with department policy.

Video footage that circulated on social media revealed the police officers on foot encountering the two Black students: Taniyah Pilgrim and Messiah Young. They were, at the time, attending Spelman College and Morehouse College. The incident took place about 45 minutes after the city’s mandated 9:00 p.m. curfew.

Police officers attacked the couple as they were in the vehicle and used stun guns on both occupants.

Samir Patel, the temporary district attorney for the Atlanta Judicial Circuit, recently dropped the charges against the police officers stating that the officers’ use of force was “the direct result of Mr. Young and Ms. Pilgrim’s resistance to and noncompliance with the officers’ instructions.”

The D.A. said that the officers were acting within the Atlanta Police Department’s use of force policy and that the force ceased after the two students were subdued by stun guns.

“The video that was widely distributed through media in the days following May 30, 2020, was not an accurate portrayal of the entire encounter between Mr. Young, Ms. Pilgrim, and law enforcement,” he said.

“I wholeheartedly believe that Georgia has made significant progress in improving how our communities and police work together and we must continue that positive path, always guided by the rule of law.”