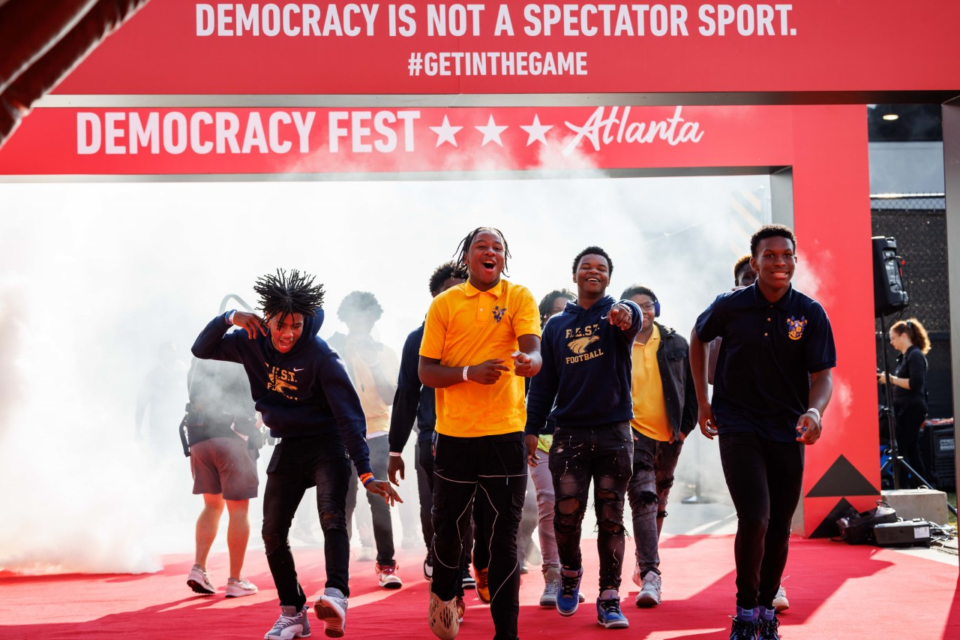 This past Tuesday on National Voter Registration Day, Arthur M. Blank Sports and Entertainment celebrated its annual Democracy Fest and brought together the Atlanta Falcons, Atlanta United, Atlanta Dream, Atlanta Hawks, and the Atlanta Braves to unite with Atlanta Public Schools, UPS, Chick-Fil-A, and The Community Foundation for Greater Atlanta.

The celebratory festival was held at The Home Depot Backyard at the Mercedes Benz Stadium in Atlanta, Ga. Democracy Fest brought over 3,000 11th and 12th grade Atlanta Public School (APS) students to celebrate civic education, community engagement, and youth empowerment. The day was filled with activations from Atlanta’s sports teams, appearances from local and national celebrities, live games, and more. Together, some of Atlanta’s biggest corporations and most beloved hometown teams delivered a high-energy and high-impact day to move our city, state, and country forward in the spirit of Democracy!

High schoolers arrived at the event through a tunnel, mimicking the excitement of the gameday experience, they were welcomed by the host for the day, Jovan Paige, founder, and CEO of Stay Jotivated. Jovan introduced the Florida Agricultural & State University (FAMU) Alumni Band and local bands from APS high schools. He was joined by famous actor, Terrence J, Atlanta-based comedian, Desi Banks, and award-winning rapper, Quavo, who closed out the event with a roaring performance of his hit singles.

“I am so proud of y’all [Atlanta Public School students] for being down with democracy,” said Quavo.

“Democracy is dope…you know we gotta just walk it like we talk it. Y’all vote and change the world. Let’s get it.”

The day continued with remarks and virtual appearances from celebrities like DJ Khaled, Monica, D.C. Young Flyy and the Cast of Wild N’ Out, and Selena Gomez, all with similar messages that amplified the importance of civic engagement, education, and celebrating democracy. Activities were spread across the entire Backyard footprint, including an Atlanta Falcons “Throw Like A Pro” challenge to test their throwing aim, an Atlanta United-branded soccer simulator, and an Atlanta Dream-inspired sport court where students were able to “ball out” while testing their democracy knowledge. Students also took flight as Democracy Champions in the Democracy Fest Fun Zone that featured a zipline, rock climbing wall, trampoline bungee jump and a tackle obstacle course.

The nine APS high school students are responsible for Democracy Fest’s ideation and execution. They were selected to serve as members of the Atlanta Youth Advisory Council to ensure youth were represented in all aspects of the program, and to curate an engaging democracy festival for their peers. These student leaders participated in workshops and training all summer and will follow up with their respective schools to continue the legacy of the democracy initiative.

“I was excited to participate in Democracy Fest to help other young people recognize the impact of their voices and I look forward to continuing this through November and beyond,” said Quentin Carter.

“When all of us come together — across race, gender, family background, sexual orientation, gender identity — and participate in elections, we can change our country for the better.”