AT&T Dream in Black Highlights Black Women in Music, Tech, and Culture at the 2022 Essence Festival 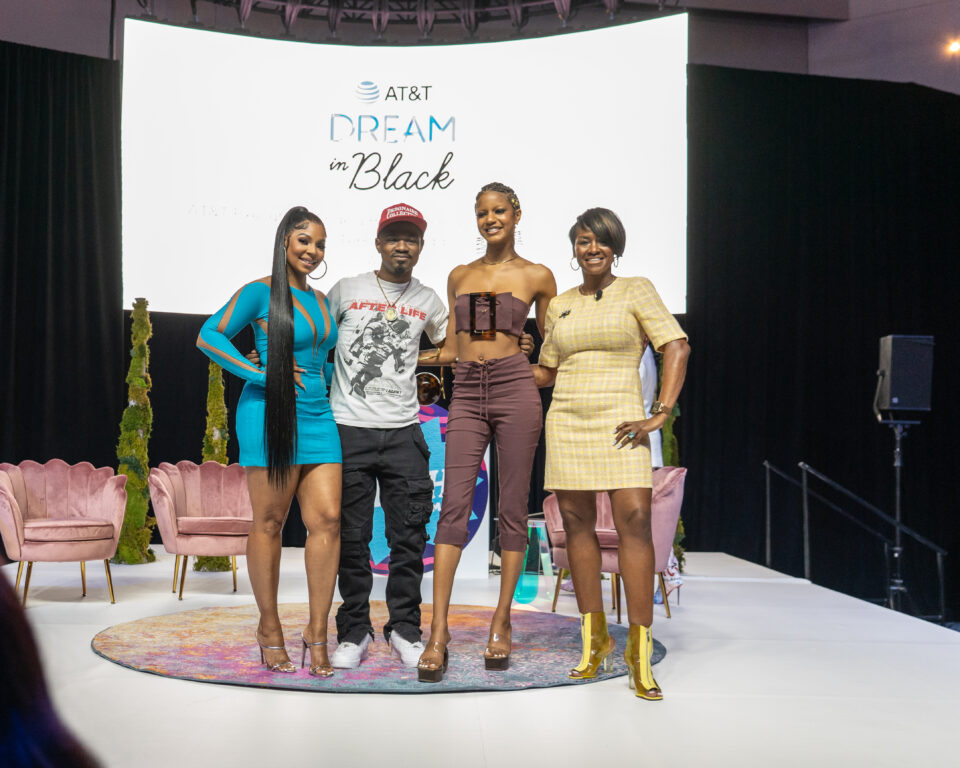 Ashanti made an indelible mark in the music industry in 2002 with the release of her chart-topping single “Foolish” and groundbreaking self-titled debut album, which holds the Guinness World Record as the highest-selling debut by any female artist in the U.S. Now, two decades later, the 41-year-old Grammy Award-winning singer is still breaking boundaries and moving R&B lovers with her timeless hits while writing the next chapter of her life.

Earlier this year, the multiplatinum singer partnered with tech entrepreneur Janice Taylor to launch EQ Exchange, one of the first female-owned Web3 companies in Silicon Valley. She also released her line of non-refundable tokens (NFTs) with EQ Exchange in April to mark the 20th anniversary of the release of Ashanti. “I’m super excited and humbled to be the first Black female music artist to co-found a Web3 company,” she told BLACK ENTERPRISE at the 2022 Essence Festival of Culture in New Orleans.

In addition, the Long Island, New York, native is re-recording her eponymous album and releasing it as an NFT to own her masters. However, she admits that diving into the tech industry was initially intimidating. “It was a little scary at first,” said the “Happy” singer. “But we’re progressing so much with technology, especially during the pandemic. Being connected is essential. So, I felt I wanted to step into this world and understand it to be able to tell people [that] it is so essential, and it’s so important to own your intellectual property. And that’s what creating NFTs is all about.”

In addition to promoting her recent venture into the metaverse during the “AT&T Dream in Black Presents NFT’s: The New Face of Technology” panel, the “Rock Wit U” singer made several other appearances throughout the festival weekend. She performed a medley of her hits on the AT&T Dream in Black stage, held a book signing for her new children’s book My Name is a Story, and opened up about her career journey during a fireside chat at the Black Excellence Brunch at the Treme Market Branch in New Orleans. On Sunday night, she made a surprise performance during The Roots’ set at the Superdome, singing a run of hits like “Always on Time” and “Foolish.”

“I’m super humbled and honored to be here, and obviously partnering up with AT&T. I love what they’re doing with our community, making sure we have service, making sure things are working, making sure that we’re able to stay connected,” said the songwriter.

Ashanti’s NFT panel and live performance were just a couple of highlights presented by AT&T Dream in Black during the highly anticipated festival. Other talents, including actor and TV personality Romeo Miller, model and entrepreneur Lori Harvey, actor and host Terence J, and actress LaLa Milan also participated in panels, discussing a range of topics from wealth to branding to HBCUs. Meanwhile, celebrity stylist and creative director J. Bolin and singer LeToya Luckett shared the stage for a fireside chat about fashion and personal branding.

Launched in 2018, Dream in Black initiative was created to connect, empower, and uplift Black and Afro-Latinx communities through experiences and opportunities. “This platform is about inspiration and inspiring, particularly the Black community to imagine and reimagine all that’s possible,” said Angela Baskerville, Vice President of Corporate Systems & Talent Enablement. “It’s such a great intersection for Dream in Black to be partnering with Essence Fest because Essence has been doing that for a long time.”

Baskerville added that spotlighting Black women in tech is necessary to increase the pipeline of Black girls in the industry. “I’m excited as a Black woman technologist to be here representing the Dream in Black platform and AT&T.”

Corey Anthony, a Senior Vice President and the Chief Diversity & Development Officer at AT&T, was also excited to return to the festival held virtually in 2020 and 2021 due to the pandemic.

“We are a longtime partner of Essence and the Essence Festival. It’s important because this is arguably the premier event representing Black and Afro-Latinos in this country,” he told BE. “It’s a great opportunity to recognize and celebrate Black women.”

Anthony added that the festival allows AT&T to connect directly with Black women and spread awareness around company initiatives designed to empower them.

“Before we even go external to communities and customers that we serve, it starts with what we do inside of our company. And we have been very intentional now for a number of years about how we identify and develop Black talent in our company, and specifically Black women. So, we’ve created a program we call Executive Black Leadership Experience, where we identify our highest potential top talent Black women in our company, and we carry them through this learning experience that lasts roughly a year.” He says the initiative was created to educate employees about Black women’s unique experience and use that information “to accelerate their competitiveness for opportunities in our business to advance and grow.”

As a Black man married to a Black woman and raising a daughter, Anthony says elevating Black women in the workplace is an opportunity he cherishes.

“I’ve always had a unique love affair, if you will, with Black women,” exclaimed the Texas native. “Black women are just incredibly impressive to me,” he said. “I have a responsibility; I owe that to Black women,” he continued.

“I love to see Black women flourish,” he said. “I’ve been very fortunate and blessed in my life to be surrounded by all of these Black women who were just incredible in every respect. And so, if I have an opportunity to help out, then I’m glad to do it.”