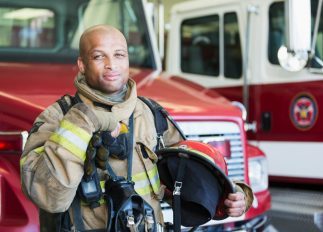 AT&T has been selected to build the country’s first nationwide broadband network dedicated to first responders.

The telecom giant was chosen by the U.S. Department of Commerce and the and First Responder Network Authority (known also as FirstNet).

FirstNet and AT&T have sealed a 25-year contract agreement. From a press release on AT&T’s site, the terms of the agreement include:

The FirstNet network will be operational in every U.S. state and territory, serving more than 320 million people across the United States. The network is also expected to create 10,000 jobs in the U.S.

Emergency responders currently use the same networks and infrastructure as consumers and businesses. This creates a significant amount of congestion on carrier’s networks. This traffic can slow down vital communications during an emergency.

The 9/11 Commission Report determined that many firefighters lost their lives on 9/11 because they were unable to hear orders to evacuate the falling Twin Towers. Critical network equipment had been damaged and police and firefighters were communicating via traditional cell networks, which were jammed. The report concluded that there was an oversight in establishing an efficient and reliable communications system for first responders during a catastrophe.

“We are honored to work with FirstNet to build a network for America’s police, firefighters and EMS that is second to none. This is an unprecedented public-private investment in infrastructure that makes America a leader and public safety a national priority,â€ said AT&T’s chairman and CEO Randall Stephenson in a released statement.