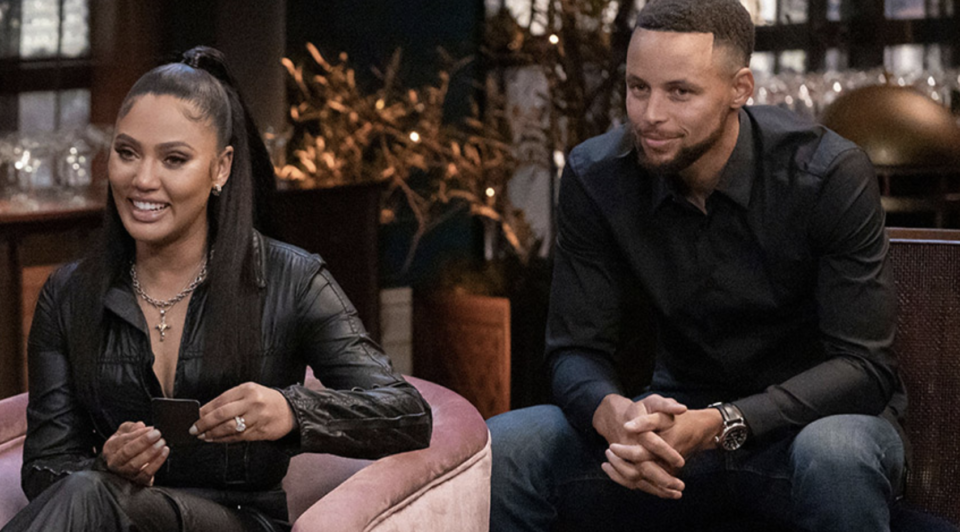 Ayesha and Stephen Curry have added another title to their growing list of TV productions, with “About Last Night,” a new gameshow coming to HBOMax.

According to Warner Media, each episode of the show will find the Currys challenging three celebrity couples to relationship trivia and games aiming to see which celebs know their partners best. The couple that emerges in the finals will compete in a bonus round against the hosts, for a donation to their charity of choice.

The “About Last Night” trailer, released on Jan. 26, spotlights guests including Draymond Green, Loni Love, and Terry Crews. Stephen welcomes his guests, with a toast “To an amazing night full of competition and getting to know each other a little better.”

The trailer gives viewers a snippet of the provocative questions asked of the various couples. “If you had a warning label attached, what would it most likely say,” asks Ayesha in one session.

Terry Crews throws out a question to the Currys, “Who walks around naked more?” as Ayesha takes a sip of her drink blindfolded, to which Steph, also blindfolded, inquires of his wife, “Where am I when you’re walking around naked.”

The trailer teases honest, uncensored and unfiltered reactions from the guests.

Since launching his production company Unanimous Media in 2018, Stephen Curry has remained active in the world of film and television. In addition to the spots competition show Holey Moley, he has also served as executive producer on the films Breakthrough and Emanuel, which was based on the responses of the families of those killed by Dylann Storm Roof at Emanuel AME Church in Charleston.