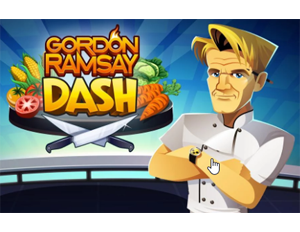 Restaurant/time-management game fans will recognize that Gordon Ramsay Dash is almost the same game as Glu’s Cooking Dash, except with Ramsay’s branding all over. In some ways, Ramsay Dash is even better, with more detailed graphics, great music, and interesting recipes.

Although I immensely enjoy Gordon Ramsay Dash as a time management game lover, a foodie, and a Chef Ramsay fan, some ‘bugginess’ in the game means that a software update is likely in the near future.

Dashing Ramsay
The game’s Chef Ramsay character (who looks like the real world version–even with the wrinkly forehead) barks out orders, encourages, and scolds during the game.

You level up by learning recipes and serving as many patrons the proper orders as possible before time runs out. There are power-ups and extras such as VIPs who tip big time and a power Gordon mode, where the chef swoops in to help.

The music is fun and intense. Hearing Ramsay’s actual voice proclaim, “spot on,â€ “shut it down!â€ and even drop the F-bomb (kind of) is cool. The canned responses do get a bit repetitive. You can turn the music off, and it looks as though there is a button to turn off the sounds effects (like Ramsay’s voice) but when I tap it nothing happens.

Money goes fast. As you level up, you are forced to upgrade kitchen items and food–the only way you can really advance. Gold bars are needed to buy items, and they are no more expensive than typical in-app purchases (actually, they may even be a little less).