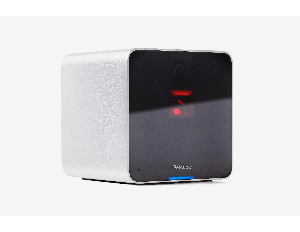 It’s heartbreaking to leave pets to go to work, school, and other places where you typically can’t bring them. However, this is why Petcube exists.

Petcube is an interactive, Internet-connected device. It lets you see, hear, and play with your dog, cat, hamster, snake…or whatever, when you are away from the den.Â The cube-shaped camera connects wirelessly to your home WiFi. Â Download the Petcube app to your smartphone to view your pet, talk to it, and even play with it via a laser-pointing game.

Setup is fairly simple. Connect Petcube to power and download the app. The app provides instructions on connecting the device to your WiFi.Â The secret to successfully setting up Petcube is placing it close to your WiFi router. I initially set the device up in my kitchen, where my dog usually lingers when I am away from home.Â I had a hard time connecting Petcube with my WiFi, until I moved it closer to the router. Once Petcube is connected and configured, you can then move it to any area of your home, as long as there is a good WiFi signal.

You can put your Petcube’s video stream on public display, so that anyone with the app can peer into your home. (Although, why anyone would want to do so, I can’t say. But, it’s great being able to see my dog while I am at work.)

By the way, unless you want to scare the bejesus out of your pet, get them familiar with your voice streaming through Petcube, while you are at home and out of sight. Frankly,Â when I talk to my dog after she has already seen me leave for the day, the sound of my voice tends to startle her. So, I don’t use the audio streaming feature much.

As mentioned, you can manipulate a laser beam for your dog or cat to chase via the app. The motion was herky-jerky for me and the feature didn’t work all that well through my connection, even though the app walked me through calibrating the laser with the phone’s touchscreen. Personally,Â I think it’s kind of cruel to have your animal run around aimlessly, overexcited from chasing a laser, when you are not home–but that is just me. The laser capability is available, though.

Overall, Petcube is a good way to keep an eye on your pet. You can use another webcam solution, such as Netatmo, to do the same. However, Netatmo is not wireless, so you are limited in where you can place the camera.

Petcube is available on AmazonÂ for $149. The company also recently announced an upcomingÂ version that will allow you to remotely dispense treats to your pet.

FacebookTwitterYoutube
← The Pros and Cons of Starting a Business With Friends ← Intel Releases Diversity Stats, Shows Support for LGBTQ Community
×