Baby Girl's Skull Is Fractured After Headstone Falls On Her Head 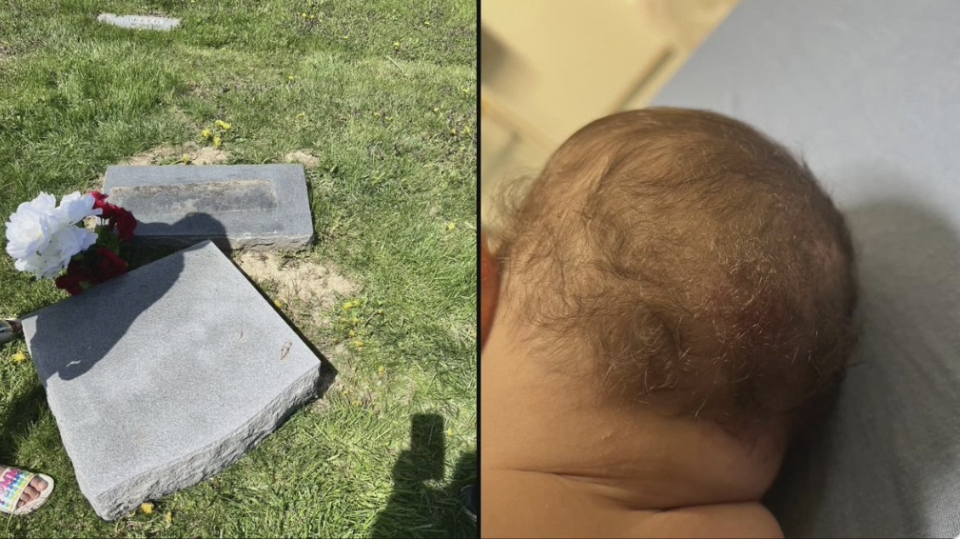 A Detroit couple is reeling after their 10-month-old daughter had a cemetery headstone fell on top of her.

On Mother’s Day, Jessica McFadden and her family members went to pay respects to their late grandmother at Gethsemane Cemetery,  Fox 2 reported. McFadden set her daughter, Melani, in front of the headstone to capture a photo, when the the stone fell onto the child. .

“That headstone was not properly placed,” McFadden told Fox 2.

“I didn’t know if my baby was alive under there. I couldn’t hear my baby, I couldn’t see my baby.”

Family members rushed to rescue the child. “She had a huge knot, and it was bleeding on the back of her head, and at that moment my daughter started vomiting, and she went out,” McFadden recalled.

Melani McFadden was transported to Detroit’s Children’s Hospital, where doctors diagnosed the child with a fractured skull, MLive.com reported.

“I’m just really angry, I guess you could say,” Melani’s father, Jeremy McFadden, told Fox 2. “I’m really angry that this happened to my baby, and I wasn’t there to do anything about it.”

The McFadden family has hired attorney Jonathan Marko, who said that not only was the upkeep of the headstone dismal due to short staffing but the gravesite plaque was not installed properly.

“It’s not like lightning struck and this tombstone suddenly fell down. This tombstone was a disaster waiting to happen,” Marko explained to Fox 2. “We have preliminary information that because of the staffing shortages they had to cut back on what they were able to do, but this is what happens when we cut funding and put a bare-bones operation in our public services–they don’t operate the way that they’re supposed to operate.”

The family also claims other headstones have toppled over on the property, Fox 2 reports.

The City of Detroit owns the cemetery and issued a statement:

“The city extends its well wishes to the family and hopes for a full recovery for the child.

“Headstones are installed by third party companies hired by individual families. The cemetery operator has no record of any concerns about this specific headstone being in danger of falling, nor had it fallen and been previously reset.”

The McFadden family is trying to locate the individual who emplaced the headstone five years ago.