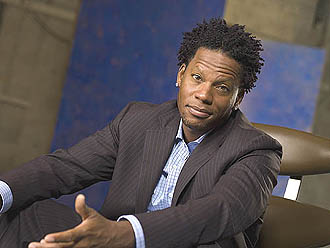 ONE OF THE ORIGINAL KINGS OF COMEDY, standup comedian and actor D.L. Hughley isn’t one to shy away from hot-button topics. Taking a stab at news, politics, and the like, his “unconventionalâ€ weekly show D.L. Breaks the News debuted last fall on CNN. Thrown smack in the middle of one of the most exciting election years in recent history, the 45-year-old put his colorful, and sometimes skewed, humor on current events. This month, Black Enterprise catches up with the funnyman and gets his commentary on the economy, President-elect Barack Obama, and what he really thinks–or at least used to think–about America.

How do you think the U.S. economy tanking and the domino effect that followed made a difference in the way Americans voted in the election?
Leading up to the election, things were so bad that people knew the old way wouldn’t work anymore. Voters were looking for change. And for some, old white men represented the old way. It’s a bad time to be an old white politician right now.

You say voters wanted change, but you admit that you didn’t think Obama would win. Did race contribute to your cynicism?
IÂ didn’t believe Obama could win or that America would elect a black as president. And now I feel ashamed of that. We are turning around as a country and I’m really proud to be an American. I’ve always loved my country, still it was never about how I loved it, but how it felt about me.