Kareem Abdul-Jabbar Talks New Book What Color Is My World? 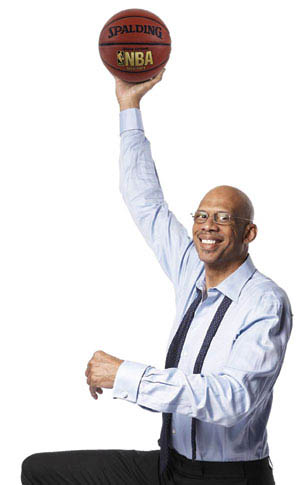 Basketball legend Kareem Abdul-Jabbar is one of the greatest centers to ever play the game. Since retiring from the Los Angeles Lakers in 1989, he continues making his mark off the court. Secretary of State Hillary Rodham Clinton recently named him as a U.S. global cultural ambassador. Abdul-Jabbar talks with Black Enterprise about his work to uplift today’s youth and his new book, What Color Is My World? The Lost History of African-American Inventors, which is a New York Times best-seller.

What do you hope to convey to young people as an ambassador?
I am interested in giving an accurate picture of life in America, which includes highlighting the things that make America such a special place. My goal is to help them achieve a better future. Children that are raised in harsh economic conditions, whether in the U. S. or in the Third World, are so desperate to improve their lives that they don’t have a realistic plan for how to do so. Many children look to sports or entertainment as the way out because those are the icons they see on TV. Without crushing anyone’s dreams, I try to teach them that there are more realistic alternatives. A solid education can open whole new worlds of opportunity in business, science, and the arts. When they see that I’ve used my education to make the transition from athlete to author to entrepreneur, they see that it’s possible for them, too.

Why was it important for you to write a children’s book about African American inventors?
It had always bothered me that most history books used in American schools only mention Afro-Americans when discussing civil rights and slavery. The experiences of black Americans include so much. By writing this book, I hope to make the picture more inclusive and to detail what black Americans have done to make American life special.

How did you become a black history buff?
When I was in high school, I participated in a mentoring program that taught me about the Harlem Renaissance. Having grown up around Harlem, I was shocked and embarrassed that all these amazing things had gone on and I didn’t know about them. I realized I couldn’t count on the school system to teach me the truth about black history, so I took the reins of my education in my own hands. I’ve been studying history ever since.

What is it like to have a second career as an author?
I’ve been writing books almost as long as I played basketball. I’ve often said that if I hadn’t been a basketball player, I would have been a history teacher. My success in basketball gave me the platform, but my books gave me the voice to reach children with my message about black pride and independence. In that way, I don’t see them as separate careers, but rather a different form of the same career goal, which was to entertain and to teach.