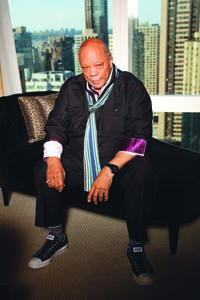 Renowned musician and producer Quincy Jones started his six-decade career as a trumpet player before becoming a sought-after arranger. In 1961, he was named vice president at Mercury Records, becoming the first high-level black executive at a major label. The 78-year-old Chicago-born artist also broke ground for African Americans by writing major motion picture film scores. As chairman and CEO of Quincy Jones Entertainment, he produced television hits such as The Fresh Prince of Bel Air and created Vibe magazine. black enterprise spoke with the 27-time Grammy award winner about his longevity in the business, the importance of artists owning their material, and the future of the industry.

How did you get interested in music?
My father [moved] me and my brother to Bremerton, Washington. We broke into an armory one week because we heard there was lemon meringue pie and ice cream. I broke into this supervisor’s room and I saw this piano and almost closed the door, and thank God something above said ‘Go back to that door, idiot,’ and I went over to that piano and I knew when I hit it, that was what I would do for the rest of my life. Every drop of blood and cell in my body could tell me that. And I stayed after school and played tuba, sousaphone, trombone, so I could be up front with the majorettes in the marching band. I really wanted to play the trumpet, and I finally got to trumpet. That’s why I love to write for brass. I write for anything from a dance band to symphony orchestra.

Most people don’t have that range. Was that something that somebody mentored you to do?
In a way Ray [Charles] did. In Seattle in the ’40s you had to play everything, from Jewish weddings and bar mitzvahs to the black clubs. I studied in Paris in the ’50s with the greatest composition teacher on the planet [Nadia Boulanger], who was a mentor for Stravinsky, Aaron Copland, and Leonard Bernstein. No genre has ever bothered me whether it’s big band, bebop, doo-wop, hip-hop, nothing.

You’ve taught artists to own their stuff, whether it’s copyrights,
masters, or negatives of film. How did you know to do that?
If you don’t have a copyright, a negative, or a master, then you’re not in the music business. The value is in the ownership of those things. [Early in my career,] I’d go in on a record and I’d sign a contract, and they’d say, “You can say anything you want, but you’re only getting 1%.â€ And I’d sign it, and they’d put somebody else’s name on it as the writer, and they’d publish it. They owned 75% of the song before I walked out the door. I said we’re not going to have that. That’s some plantation stuff. It took me a few years, though, because everybody was going through that back then. The exploitation, especially of black entertainers, was probably at its peak in the ’50s.

Tell me your thoughts about the future of music.
We are at an amazing crossroads right now. We’re at the end of the recording industry as we know it, and that hurts me a lot. All over the world, there’s piracy because of digital, CDs, and DVDs. The kids just take the music now. I’d say in 10 years there won’t be a recording industry. We’re going to have to reinvent it.