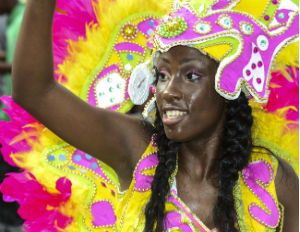 Move over Trinidad! There’s a new Carnival on the block, and all roads lead to the Bahamas.

If you’re a Carnival junkie like me, then you know “Carnival feverâ€ is more than just the parade; it’s the people, the culture, the music, and the food that makes your Carnival experience special. And it’s true what they say; Carnival is indeed better in the Bahamas.

Recently wrapping up its secondÂ year, the Bahamas’ Junkanoo Carnival is an experience of a lifetime. The festival, which continues to increase in popularity and attendance, rivals that of other carnivals throughout the Caribbean for one special reason: it incorporates its Junkanoo culture, which is unique to anywhere in the world. It is an exciting four-day event that rivals 200 other Carnival celebrations around the world.

The festival is not just great for attendees; in just two years, the festival has created employment for some 7,000 Bahamians, including 1,169 Bahamian entertainers who performed at the main events as well as promotional events leading up to the Carnival. In Grand Bahama, 30,000 patrons turned out for the kick-off event, while 85,000 patrons attended the three-day event in Nassau. Not bad for the new kid on the block, right?

Also, the event costs the government about $11 million, while generating $6.6 million in estimated tax revenue. Junkanoo Carnival is also responsible for bringing about a proliferation of entrepreneurial activity in the entertainment industry.

Visitors in attendance were able to immerse themselves in concerts, cultural shows, and street parades showcasing the Bahamian cultural festival Junkanoo, native rake and scrape music, in addition to arts and crafts, cuisine, music, and dance.Â The events included: JunkaMania, Music Masters, Midnight Rush, and Road Fever. JunkaMania is a musical event showcasing Junkanoo music and other Junkanoo-inspired folk forms, such as drumming and dance, on the biggest Junkanoo stage in the world.

Interested in checking out the Bahamas Junkanoo Carnival in 2017? Here’s everything you need to know to prepare: www.thebahamascarnival.com.