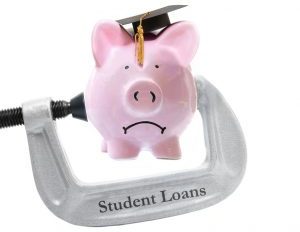 In a stunning bait and switch, the U.S. Department of Education leaves hundreds of thousands of student loan borrowers uncertain as to their eligibility for student loan forgiveness.

You may not be affected by this turn of eventsÂ because it’s unlikely that you’re in the program even if you’re eligible. From the beginning, the department’s commitment to its own Public Service Loan Forgiveness Program has been questionable.

The fact that only 1% of eligible borrowers have signed up for the program raises questions–and prompted Jobs With Justice to do an investigation, which I wrote about here.

But now the Education Department, in a recent legal filing, has “suggested that borrowers could not rely on the program’s administrator to say accurately whether they qualify for debt forgiveness. The thousands of approval letters that have been sent by the administrator, FedLoan Servicing, are not binding and can be rescinded at any time, the agency said,â€ the New York Times reports.

No Loan Forgiveness for You

In order to qualify for the loan forgiveness program, borrowers had to make 120 consecutive payments on their student loans and work in the nonprofit sector or in government.

The program started in 2007. This October is when borrowers could begin applying to have the rest of their loan debt forgiven. But now some are being told that their eligibility status was granted in error–and that their ineligibility is retroactive.

No mechanism for appeal appears to be in place, the Times reports.

The program’s complexity, low enrollment, and lack of transparency are all mind-boggling. The only good news here is that since so few people signed up for it–550,000, according to the Times–relatively few are being thrown under the department’s bus.

In an earlier Times article, four borrowers who are suing the department assert in their legal brief that they would have chosen “different jobs, borrowed less, or entered different repayment plans had they known the rules would change.â€

For more, visit the Times.