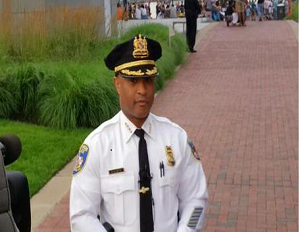 Baltimore Mayor Stephanie Rawlings-Blake announced Wednesday that she has replaced Police Commissioner Anthony W. Batts amid a recent surge of violence in the city.

“We cannot grow Baltimore withoutÂ  making our city a safer place to live,” the Baltimore Sun reports Rawlings-Blake saying at a press conference. “We need a change. This was not an easy decision, but it is one that is in the best interest of the people in Baltimore. The people of Baltimore deserve better.”

The mayor’s announcement came just hours after the police union issued a critical report of the department’s response following the riots that took place in reaction to the death of 25-year-old Freddie Gray, who suffered fatal spinal cord injuries in the custody of police. Since Gray’s death in April, homicide rates have been on an uphill climb, with the city having 42 recorded homicides in May alone, making it the deadliest month in 25 years, and 31 recorded homicides in the past month.

Rawlings-Blake appointed Batts to lead the city’s police force in October 2012, after he had resigned as the police chief in Oakland, California amid criticism of his handling of civil unrest there. She has named Deputy Police Commissioner Kevin Davis as interim commissioner effective immediately.

Go Small and Save on Long-Distance Calling Rates