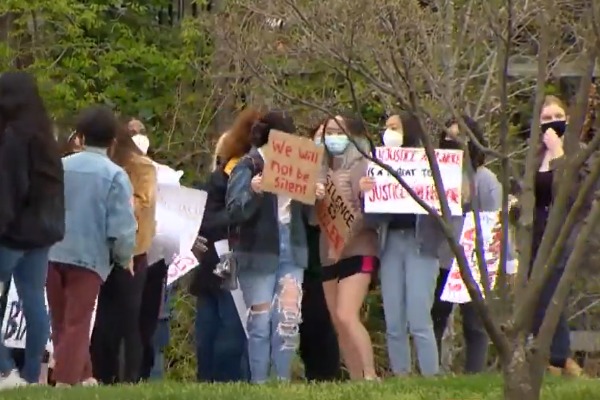 A Black teacher in Baltimore who resigned following an incident of alleged mistreatment fueled a movement where students from three private schools teamed up for a peaceful protest and walk out.

Close to 100 students and faculty members from Bryn Mawr School, Roland Park Country School, and Gilman School hit the streets on Friday morning to protest the treatment of a former Black teacher who resigned after being berated by a white student, Baltimore Sun reports.

Adrienne Knight was employed at Bryn Mawr School, but quit after she posted a YouTube video earlier this year detailing an encounter with a white student who told her to go “fetch me something.” She recalled the student gluing a sheet of notebook paper to a desk. When Knight asked the female student to clean up the mess she made, the student allegedly told Knight, “I’m not going to clean it up, but if you want to go fetch me something to do it, then you can do it.”

Knight worked for Bryan Mawr School for four years as the drama and seminar teacher. While the details leading to her resignation haven’t been revealed, Niara Robinson, a teacher’s assistant at the school, understood how the word “fetch” could be a trigger word when used by a white person toward a Black person. “I only got a chance to work with her a short period of time. It was clear to me that she was connected with the students,” Robinson said.

The student-led walkout was organized by Black at the Tri-Schools, an Instagram group that started in response to the death of George Floyd. Signs at the protest read, “Recognize Black Faculty,” “Justice for Ms. Knight,” “Stop Silencing Black voices” and “We are not Targets. We are Humans.” The students and faculty chanted  “Black Lives Matter” while marching around the school where the alleged incident took place.

“Bryn Mawr’s systemic racism cannot be improved without employing more faculty of color,” said Grace O’Keefe, a former teacher at Bryn Mawr. “But, as many of you are aware, BMS has a decades-long pattern of alienating, pushing out, and firing Black faculty,” she wrote on the Instagram page.

Officials at Bryn Mawr School acknowledged the protest and Instagram page. “We are aware of the Black at the Tri-Schools Instagram account and have taken very seriously the stories and experiences that have been shared since last summer,” said Deborah Baum, a spokesperson for Bryn Mawr. “We have met with students, families, employees and alumnae who have come forward to bring voice to their experiences, and the school committed to meaningful and lasting change through our Diversity, Equity and Inclusion Action Plan.”

However, according to one faculty member who asked to remain anonymous, there hasn’t been much change. “There has not been progress, especially with Ms. Knight’s incident,” the faculty member said. “That goes to show what they’re saying is not being put into action.”