Baltimore Unrest One Year Later, Has Anything Changed? 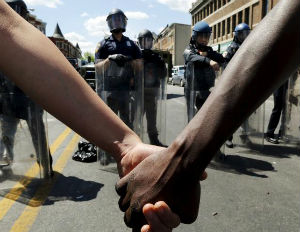 When news broke about Freddie Gray, a man who died while in police custody last April, the nation watched in shock as Baltimore became engulfed in riots, protests, and unrest. Police in riot gear confronted a mob of teenagers, sparking a series of fires and acts of violence that resulted inÂ more than 200 arrests and millions in damages to property in one day.

Gray’s death became a focal point in the national debate over police brutality. Just as it had in Ferguson, Chicago, Minneapolis, Charleston, and in hundreds of other towns and cities across the United States, his death also sparked a birth of new civic advocacy, grassroots organizing, and spurred a new dialogue on the state of racism in our nation.

The aftermath changed the city’s political landscape and policing tactics.

Mayor Stephanie Rawlings-Blake decided not to run for another term, sparking a crowded field of candidates to run for that office. Anthony Batts, the police commissioner at the time, was fired. Under new leadership, the city police are working with the U.S. Department of Justice to implement long-overdue reforms to police tactics, training, and policy, and re-establishing relations and trust within communities across Baltimore. The police department announced it was rolling out body cameras.

Six officers have been charged in Gray’s death. The first to be tried, William Porter, ended in mistrial when the jury couldn’t unanimously agree on any of the charges: manslaughter, assault, reckless endangerment, and misconduct in office. Porter faces retrial and the remaining trials are to resume later this year. Gray’s family and the city reportedly reached a settlement awarding his relatives $6.4 million last fall.

The Rev. Jamal Bryant, the politically influential Baltimore pastor who delivered the eulogy at Freddie Gray’s funeral, was interviewed on NPR’s Morning Edition. He said that, despite the uproar, progress in addressing issues like poverty and police reform has been “very slow, almost at a snail’s pace.”

The reality is we’re still dealing with joblessness and lack of opportunity and really subpar education, notes Bryant, a keynote speaker atthe Black Enterprise Entrepreneurs Summit (May 4—7) in Miami. “Policing is important, but there are many different variables that play a role in what happened for the uprising in Baltimore a year ago.”

The NAACP released a statement: “The problems of poverty, crime, unemployment and neglect remain significant in Baltimore city and across this country [including thousands of vacant homes and decrepit public housing complexes]. As we pause today to reflect on the life and death of Freddie Gray and the future of Baltimore and our nation, we hope that more people draw from the lessons of a year ago, confront the mistakes of past policies and work to resolve the inequities caused by racial and geographic separation.”