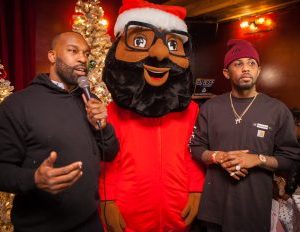 The Mall of America in Minnesota recently made national headlines after hiring an African American man to play Santa Claus for the very first time. This sparked a storm of controversy from people that read the news online, then responded with racist comments on the web. Some even called for a boycott of the Mall of America, which is the largest shopping center in the nation.

Apparently, America is still not ready for a black Santa. Still, that has not deterred two-time NBA All-Star Baron Davis from pushing for a cultural revolution around the iconic American figure. In November, Davis founded a new media company calledÂ The Black Santa Company, which creates characters, content, and products celebrating diversity.Â  The company, which also aims to create heroes and role models through the art of storytelling, is currently promoting a cool, modernized, black version of St. Nick as their first character creation.

Black Enterprise caught up with the former New York Knicks guard on Monday at The Black Santa Company’s toy drive, which partnered with AÂ Fabolous Way Foundation to donate Christmas gifts to children. While there, Davis opened up about his inspiration to start his latest venture, the lack of diversity in tech, and his motto on saving money.

Davis says his idea to launch The Black Santa Company stemmed from his desire to create content that puts a positive light on African American culture. Originally, he wanted to make a movie about a black Santa Claus. However, his vision for the Christmas iconÂ was not well received.

“A lotÂ of times, people would talk about the movie in the sense of a ‘bad Santa’ or a ‘bad, black man-turned-good.’ For me, I was like, ‘Why can’t he be somebody that’s just positive, naive, and with a different point of view of the world?’ [My idea] was kind of falling on deaf ears,” he told BE.

Rather than getting discouraged, Davis decided to launch a company that would allow him to manifest his vision for Santa Claus just the way he liked. Determined to revamp the traditional, limited conception of this iconic figure in cultural mythos, Davis said to himself, “I’m going to start The Black Santa Company, and we’re going to have holiday movies every year.â€ According to Davis, there is a need for more positive cultural images, “because there is not a lot of representation of us in media, animation, and storytelling.â€

In addition to bringing his own ideas into fruition, Davis says The Black Santa Company is a platform for others to produce stories and create characters that relate to and inspire children.

Furthermore, his company teamed up with Fabolous and his nonprofit to host a toy drive and raise donations for children during the holiday season.

“It’s important for me to give backÂ because I came from humble beginnings,” said the hip-hop star at the toy drive. “I came from knowing that, when you’re in the hood, you need opportunities. You need people, who are a little more fortunate or have more resources, to give back to people that don’t have the same opportunities [and] the same resources,” Fabolous says.

When asked about the controversy over the real black Santa at Mall of America, Davis’ responded saying he “supports all Santas, of all colors.”

“I thought it was good what the Mall of America did. I support that,” he says. “It’s all about the emotions and the affect that [the Santas] give people–not really what they look like. That was the whole point of having a black Santa Claus.”

He added that ignorance is the driving force behind those who are outragedÂ by the idea of a person of color playing Kris Kringle. “There are a lot of people in this world that enjoy conflict.â€

The former NBA player went on to talk about money, revealing that when it comes to finances, he abides by an old saying. “The fool and his money will soon part,” he said, adding, “I try to keep my money as far from me as possible. I want to spend the money on the things that I know are going to give me some satisfaction, â€ Davis continues. He also advises that others, no matter your income, “keep yourself on a budget.â€

Lastly, Davis — who launched the mobile gaming company 5 Balloons Interactive with Sean O’Brien, Executive Producer – NBA at EA SPORTS, back in 2012 — shared his thoughts on the lack of diversity in the tech industry.

“There are a lot more people of color–black, brown, yellow–that do a great job in coding and tech,” he said.Â “Once we start having the conversation, and we start having activities around it, then I definitely see that world getting bigger, broader, and better. Hopefully, The Black Santa can be the company that is a founder and leader in that.â€